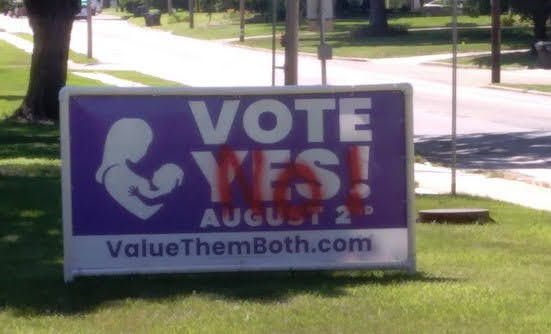 Tonight we share a document hitting THOUSANDS of e-mail boxes across Kansas.

KANSAS PRO-LIFE ACTIVISTS SHARE SCATHING CRITICISM OF 'VALUE THEM BOTH' CAMPAIGN LEADERS AND THEIR FUNDRAISING TACTICS!!!

As far as we can tell . . . There is no outright wrongdoing alleged but, just to be safe, we REDACTED ALL NAMES from this lengthy note.

What's important is the politics of this missive.

SOME DENIZENS OF THE KANSAS RIGHT-WING FEEL BETRAYED BY MAINSTREAM CONSERVATIVES WHO ALLEGEDLY FOCUSED ON FUNDRAISING RATHER THAN LEVELING WITH SUPPORTERS ABOUT THE STRENGTH OF THEIR OPPOSITION!!!

AHEAD OF MIDTERMS, KANSAS GOP INFIGHTING THREATENS TO PREVENT ADVANCES AGAINST PROGRESSIVE INCUMBENTS AND THE "VALUE THEM BOTH" BLAME GAME IS PICKING UP STEAM!!!

With SPECIAL THANKS TO AWESOME TKC TIPSTERS . . . We share the note that's circulating widely this weekend . . . Check-it . . .

I’ve finished going over available campaign finance reports for the failed VTB campaign and the numbers are astonishing.

Between January 1, 2021 and July 18, 2022, $9.5 MILLION was spent to market the amendment by the Value Them Both Association and its primary stakeholders.  And that, my friends, isn’t the whole picture.  Not only did other organizations come alongside and spend their own precious resources -- on the repeated lie that “we’re ahead, but polling shows that it’s close so keep sending money” -- but I expect, when final campaign finance reports are filed and/or those maintaining the books for each of these organizations release final spending numbers, VTBA and its primary stakeholder organizations alone will sail right past $10 million.  I’ve been told that press reports exist predicting it may be well north of that.  For a sense of scale, the Topeka Capital Journal records that the epic U.S. Senate primary between Todd Tiahrt and Jerry Moran saw the two campaigns spend a mere $5 Million - $6 Million between them.

Here’s how the spending numbers break down by top Payees (anyone receiving a combined total from VTBA or its stakeholder organizations greater than $20K):

A few things to note:

1. It is important to bear in mind that these numbers only account for spending through July 18, 2022.  It is highly likely that they will increase substantially, once spending through August 2nd is included (and potentially beyond, as campaign spending is like pushing water with a broom…it doesn’t necessarily come to a standstill on Election Day).

2. The next KGEC campaign finance reports related to this constitutional amendment aren’t due until early in 2023.  However, nothing says that the treasurers for these organizations (VTBA, KFL, KFL PAC, and Kansas Family Voice) have to wait until early in 2023 to produce the transparency that is called for here.  It’s been more than three weeks since the election, so spending by these organizations should be nearly wrapped up.  Why not just release final spending numbers immediately, or as soon as practically possible, so there can be some closure to all of this?

4. Though there were hundreds of individuals and vendors paid over the course of the VTB campaign, the yellow highlighted notations at the bottom of the spreadsheet reflect that 92.51% (roughly $8.75 million) of the $9.5 million spent by VTBA flowed to and through the bank accounts of the top 15 Payees.

5. Factor out those whose take was less than $150,000 and the top seven Payees received 88% of all funds that passed through VTBA and its stakeholder organizations ($8.36 million of the $9.45 million spent).  Not all of this was profit, of course, but from gross numbers flow net numbers and, knowing what I know about this industry, those net numbers were likely quite healthy (six figures would not surprise me).

6. Those line entries noted with three asterisks above are, in my experience, ripe for the old “political consultant vendor back-scratch” (kickbacks, profit sharing, under-the-table deals).  They deserve particular scrutiny by those with oversight authority and responsibility.

7. If anyone wants to see the actual Excel spreadsheet, which contains multiple tabs and hundreds of detailed expenditures, from which these summary numbers were derived, please send me a private email requesting it.

As I noted in my previous email below, for those steering the VTB campaign to have such tremendous financial resources at their disposal; to have unprecedented institutional assets available to them (the direct involvement of churches and other non-profits alone was a leg up the VTB campaign should have had over previous run-of-the-mill political campaigns); and to have the political advantage of this vote set to coincide with a primary election, should have made victory a likelihood, if not a slam-dunk.  To then not just lose, but to get blown out by nearly 20% is a scandal and shame that should forever redound to those with their hands on the levers of the VTBA.  In my view, if there was any integrity left in the political consulting and campaign management business, resignations should have been tendered by 9:00 PM on Tuesday, August 2nd.

As someone who has been working with, for, and alongside the pro-life movement since high school, the mismanagement of this campaign angers me tremendously.  Decades of hard work by thousands of dedicated, unpaid conservative, pro-life activists – to say nothing of the lives of untold thousands of babies and mothers -- were hanging in the balance in this election.

Since the Summer of Mercy (and even before), pro-life activists -- whose names many of the wizards steering the VTB effort wouldn’t even recognize -- worked and fought, often against tremendous odds and political headwinds, to elect solid, pro-life lawmakers and officials to change the pro-abortion culture that dominated Kansas at that time (in both parties).  Those policymakers, once elected, faced their own hardships, challenges, derision, smears, attacks, and opposition to gradually turn Kansas into a state leaning toward a culture of life.  But they persevered so that women and babies in Kansas began to have a fighting chance to escape the grisly abortion-for-profit industry.  All of those gains were jeopardized, of course, when our insane Supreme Court “found” a right to an abortion in our state’s constitution.

The job of those who were handed the reins of the VTB campaign was simply to restore to the people the right to make their own policy regarding abortion through their elected representatives.  And they had more resources at their disposal to get that job done than any other conservative or pro-life effort I’ve come across in my 3 ½ decades of work within the movement.

It just makes me nauseous, then, to have this effort viewed by some as a cash cow to be milked for their own personal gain -- and I’ve seen text messages from some on the Payees list salivating over how much money was likely to be spent and how much could be made from this campaign.  Given the gross numbers reflected on these reports, several likely haven’t yet wrapped their arms around how much money they will have made when the last “ka-ching” hits their pocket. Again, knowing what I know about this industry, it will be substantial.

As I’ve said elsewhere, I believe in honoring contracts and paying people for doing work (Deuteronomy 25:4).  And if someone does his or her job well and is successful, I have no problem compensating them correspondingly.  But to absolutely fly a campaign like this into the dirt while personally profiting to the tune of hundreds of thousands of dollars (potentially more) is inexcusable.  To rig bidding processes and use one’s position to distribute millions of sacrificially-contributed dollars to your inner circle of friends and associates ought to raise eyebrows and require answers.  If, as I suspect, secret kick-back arrangements, under-the-table deals, and self-dealing schemes were cooked up involving those providing services to VTB -- without such arrangements being fully disclosed to those with oversight authority -- then, in my book, that is the stuff of mobsters, con artists and embezzlers, not those whose primary interest is saving babies and women from the tragedy of abortion.  Financial considerations aside, to intentionally exclude, shush, or keep at arms-length those whose institutional knowledge and wisdom may have impacted the outcome of this election was, I believe we’re now seeing, mind-bogglingly stupid.

Regarding the margin by which Value Them Both lost, I understand that VTB’s general consultant, pollster, and primary print/mail vendor were in attendance at the retreat sponsored this past Monday by the Republican House Campaign Committee.  For reasons that leave me scratching my head, given the magnitude of VTB’s defeat just over three weeks ago (as well as other campaigns with which members of this “team” have been recently associated), all three individuals have apparently been exclusively tapped by RHCC ##############  to secure the fortunes of House Republican candidates this fall.  When the subject of VTB’s shocking margin of loss was raised by someone in attendance, the pollster revealed that she warned VTB’s leaders and consultants weeks in advance that it was losing by double digits.

Reportedly, the room grew awkwardly quiet because, as reflected in the attached “beg” email sent out in the waning days of the campaign, that’s not at all what supporters and the public were being told.  When someone at the retreat asked where the poll showing VTB with a four-point lead originated, RHCC LEADER pointed at VTB’s general consultant, whose face reportedly turned beet red.

But, “We’re losing by double digits,” doesn’t make for a great fundraising appeal, does it?  And if a campaign like VTB is viewed as a cash cow to be milked, “It’s close!  Give more!  Give again!  Give sacrificially!” are battle cries around which anyone on the Payees list can rally.  Now that the jarring truth has been revealed by VTB’s own pollster, donors, supporters, and pro-life activists have every right to question whether they were conned by those steering the VTB campaign.

As someone who grew up in a minister’s home, it will anger me beyond words if it is determined that tithes and offerings given sacrificially to churches and faith-based organizations were poured into this campaign, just to line the pockets of those whose names appear on the attached Payees list.   Those funds were contributed with sincerity and in good faith to carry out the vital mission of the church.  And, while this cause was as noble as any the church has ever taken on, I am certain that the widows, retirees, and families with young children who made those contributions would not be okay knowing that their sacrificial contributions secured a Payee’s next Porsche, million dollar home, or lavish trip to the U.A.E.  Whether one gave $10 at a VTB rally, stroked a $100,000 personal check to underwrite this campaign, or transferred millions of dollars from church coffers to the VTBA, everyone who pinned so much hope on this effort should be delivering a cold, expectant stare at those at the very top of the VTBA.

The time for silence is over.  Answers are not just appropriate, they are demanded.  Turn those contracts, under-the-table deals, and secret “arrangements” face up, boys and girls.  Full disclosure.  No hedging, shading, or hiding of the truth.  If my “breathtaking” comments are truly “unhinged,” then speak up and simply confirm or deny whether any secret deals, kickbacks, commission splits, profit sharing schemes, or other quid pro quos existed and then provide evidence to back up your position.  If such arrangements were made and those with oversight authority for VTB were fully aware of them, then that’s a serious problem for which they need to answer.  But if such quid pro-quos are discovered to have been in play during this campaign, and if they were not fully disclosed to those with oversight authority, then heads need to roll and appropriate legal action needs to be pursued, in my opinion.

Know this:  until real transparency and accountability is brought to bear in this situation, I will not be gaslighted into silence about this.  I hope I’m wrong and that no self-dealing, back-scratching or secret deals will be discovered.  But if such things are discovered, then I repeat again that pro-life Kansans deserve to know, at the end of the day, what dollar “Value” was ultimately placed on “Them Both.”
######################