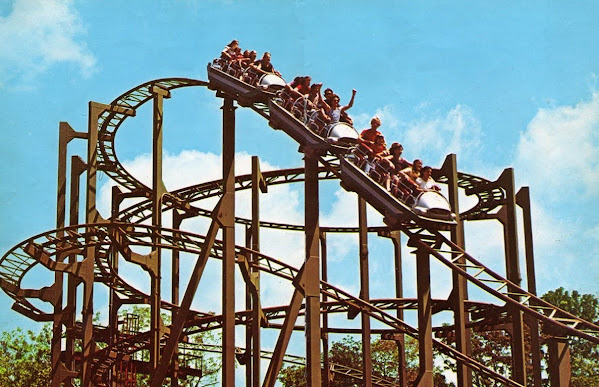 Apropos for the start of #TBT . . . We notice this morning that Worlds Of Fun is giving into Gen-X nostalgia and promising the return a beloved local roller coaster.

Here's a peek at the park's announcement this morning . . .

"Zambezi Adventure Safaris went out of business just before the turn of the century when the Zinger was thought to have gone extinct. They recently reopened their doors after new evidence suggested the Zinger had returned to the area."

After two weeks of hints and teasing photos, we finally know what's happening out at Worlds of Fun.Park officials just announced a reimagined Zambezi Zinger roller coaster made of steel and wood. Worlds of Fun said the coaster will contain nods to the original Zambezi Zinger ride, which was in the park from 1973 to 1997.

KANSAS CITY, Mo. - To celebrate the park's 50th anniversary, Worlds of Fun announced the return of the Zambezi Zinger. In 2023, the nearly 2,500-foot-long metal and wood coaster will return to the Africa region of the park.

One night out at the casinos, a withered old fellow named "Hombre" told my friend and I a story about how the decommissioned Worlds of Fun rollercoaster, the Zambezi Zinger, was partially buried in a nearby bend in the Missouri river.