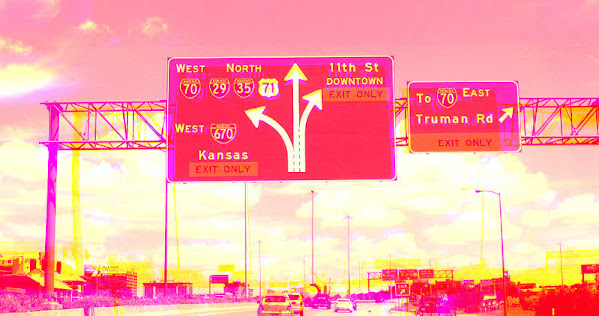 Our blog community push back on this topic has proven effective . . .

Kansas City politicos are counting on the short memories of voters to blame "systemic racism" for the "highway of death" disaster that is U.S. 71.

Now that there's a bit more cash to study the problem . . . It's worth remembering that neighborhood leaders & politicos helped to create the current hot mess.

Reality check: Listening to politicized rhetoric and urban planning hype created a deadly crisis on 71 that has cost hundreds of people their lives. Activists demanded stoplights that have resulted in shootings, crashes and constant danger. Now we wait to see a new round of "solutions" without even a tacit admission that community leaders were misguided when they tried to transform a highway into a "walk-able" path.

We can only hope that engineers and highway experts will have the courage to speak up against so many consultants and professional demonstrators this time around.

Here's a bit of history and a glimpse at the current situation . . .

People who live east of 71 Highway have to cross it to access the Prospect bus line, grocery stores and other necessities.

Originally, the plan did not include off-ramps, which would have shut off access to the neighborhoods the highway cut through.

After public outcry and input, several off-ramps and stoplights were included.

The freeway was supposed to be done by the 80s, but litigation surrounding environmental impacts and unhappy residents slowed the project down.

With city leaders like Emanuel Cleaver and Mamie Hughes urging the project along, U.S. 71 was finally finished in 2001.

History of U.S. 71: How it continues to divide neighborhoods today

KANSAS CITY, Mo. - On Monday, city leaders announced a $5 million grant that will study U.S. 71 and fund improvements along the highway. The highway has always been a contentious topic, not only because of safety concerns but also how it divides neighborhoods. U.S. 71 is a part of Alan Young's every day life.

James Gafford lives a couple of blocks east of 71 Highway in Kansas City, Missouri.Every day, rain or shine, he walks down Gregory Boulevard and crosses 71 Highway for various reasons.James went to the grocery store on Monday to pick up a couple of items.He knows every time he crosses the highway on foot, he's taking his life in his hands."To get anywhere, to get to the bus stop you got to cross that.