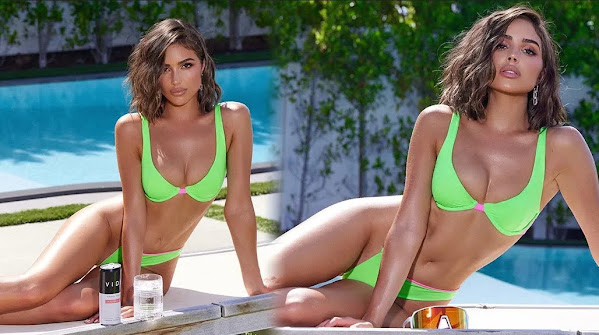 Right now we take a peek at former Ms. Universe Olivia Culpo and her latest tequila brand promo work in the era when the world struggles with post-pandemic alcoholism and we consider pop culture, community news and top headlines.

The Chiefs traded away Tyreek Hill and reloaded with JuJu Smith-Schuster, Marquez Valdes-Scantling and a bevy of draft picks on offense. But once again, their quest for a seventh consecutive AFC West title revolves around the play of Patrick Mahomes, who will be operating behind one of the league's best offensive lines.

KANSAS CITY, Mo. - The city of North Kansas City says City Hall will be closed Tuesday morning due to an internal water line repair. At around 6:30 a.m. city employees noticed there was no water at the building. Kim Nakahodo, interim city administrator, says the issue was caused by an internal pipe from the main line.

Grandview woman won't get prepaid headstone for husband until she dies

GRANDVIEW, Mo. - A Grandview, Missouri woman said it has been almost three months since her husband was laid to rest and still there is no headstone. Colleen and Bennie Asberry prepaid for burial services at 12 Gates Memorial Gardens in Kansas City, Missouri. They wanted to be side-by-side and share a headstone.

Expanding the meaning of philanthropy in Kansas City

For NaTika Rowles, emphasizing how Black residents have always found ways to give within their community is an important message in August. As executive director for the Black Community Fund in Kansas City, Rowles wants to "show that Black people are philanthropists, too," but that it doesn't have to manifest as a dollar amount.

When the school year starts and those lazy days of summer end, it can be hard to keep up with everything-especially planning dinners every night. After a long evening of toting around the kids from soccer practice to dance rehearsal, picking up a pizza pie that will feed the family-and possibly leave behind some leftovers-sounds...

CHRISTIAN MCCAFFREY looks to be chomping at the bit to start the new NFL season - after taking a playful BITE out of girlfriend Olivia Culpo. The Carolina Panthers running-back, 26, is hoping to avoid another injury-hit campaign after playing just ten games in the last two seasons.

The White House is expected to announce a plan to cancel a chunk of student loan debt on Wednesday, in addition to an extension of the existing payment pause, three sources with knowledge of the situation told The Hill. Sources said President Biden's intended measure will include $10,000 in loan forgiveness for borrowers who make...

Paul Pelosi gets 5 days in jail, 3 years of probation in DUI

As part of his probation, Paul Pelosi will also be required to attend a three-month drinking driver class, and install an ignition interlock device, where the driver has to provide a breath sample before the engine will start. He will also have to pay nearly $7,000 in fines, the judge said.

The Justice Department seized at least 700 pages of classified materials when it first recovered documents from former President Trump's Florida home in January, according to a letter released by the National Archives on Tuesday. An exchange between the custodians for presidential records and Trump's attorneys, released after it was first obtained by a conservative...

Cheney is using some of Trump's own consultants and allies, including the powerful Koch network, to keep the former president from a second White House stint.

AP-NORC poll: Most in US say they want stricter gun laws

CHICAGO (AP) - Most U.S. adults want to see gun laws made stricter and think gun violence is increasing nationwide, according to a new poll that finds broad public support for a variety of gun restrictions, including many that are supported by majorities of Republicans and gun owners.


Rent Really Is Too Damn High

Rent prices in the U.S. are rising at the fastest pace in decades, slamming U.S. households across the country, according to data from the Bank of America Institute. Median rent payments for Bank of America customers surged 7.4% in July from the previous year, up from 7.2% in June, according to a new report from the Charlotte-based bank.

The US's strategic petroleum reserves have dropped to their lowest level since 1985. Stockpiles have fallen to 453 million barrels after President Joe Biden ordered a record release to ease gas prices. Analysts say releases from global reserves have contributed to the sharp fall in oil prices.

Six months into the war in Ukraine, the entire world is losing. Will this conflict ever end?

Ukraine is on life support, Russian troops are taking massive casualties, and the rest of the world is saddled with severe food shortages, spiraling inflation, the risk of a nuclear disaster and other hardships fueled by a savage war that shows no sign of soon ending.

What the Twitter whistleblower could mean for Elon Musk's takeover deal

Elon Musk's monthslong effort to buy - and then to get out of buying - Twitter has been marked by a range of unexpected twists. Now, a stunning whistleblower disclosure from the company's former security lead Peiter Zatko is almost certain to become the latest complication.

Some Chiefs fans need subscription to watch this game

Get a free Amazon Prime Subscription and watch the game KANSAS CITY, Mo. - Fans are getting excited about the NFL season as the team prepares for its final preseason game. According to the organization, there are Chiefs fans in every state, in dozens of countries, and on nearly every continent.

Who to root for when it's not the Kansas City Chiefs?

Excitement is percolating everywhere you look among NFL fan bases, the feeling in Chiefs Kingdom is no different. We're now 27 days away from the opening night matchup between the Buffalo Bills and defending Super Bowl champion Los Angeles Rams and only 30 days away from the entire league kicking off on September 11.

Between now and Sept. 15, LaunchKC invites innovative, early-stage tech startups looking to take their business to the next level to apply for $50,000 in funding, plus access to a host of support services - in exchange for headquartering your business in Kansas City, MO for at least one year.

NWSL Championship gets 1st ever primetime spot on TV

Zedd, Maren Morris & Beauz - Make You Say is the song of the day and this is the OPEN THREAD for right now.