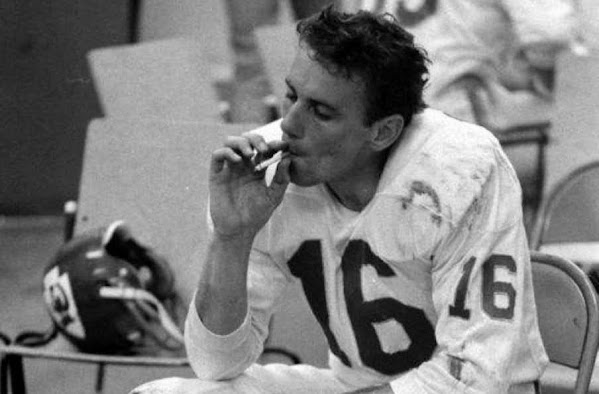 Our most popular post of all Summer 2022 was merely a note about Len Dawson now undergoing hospice care.

In the past 72 hours there has been an outpouring of sympathy & well wishes from across the nation.

Amongst the many tributes . . . Here's one of the better observations . . .

Dawson is famous for many things in Kansas City. When the team was still young, he became their star quarterback and led the the team to two of the first four Super Bowls. It’s still pretty amazing to think that the Kansas City Chiefs—yes, the same Chiefs who were pretty terrible for the better part of 50 years—actually were in the very first Super Bowl.

And they were led by Lenny the Cool. Why was he known as Lenny the Cool? No doubt, it was due to his Hall of Fame play on the field. But there’s one particular moment from that very first Super Bowl that lives on in the “Hall of Cool”.

Why Len Dawson will always be Lenny the Cool

We learned late Friday night that Kansas City Chiefs legend Len Dawson has entered hospice care. This is no doubt a very sad and painful moment not only for Dawson's family but also the entire Kansas City community. Our own Charles Robinson wrote a wonderful tribute to the Kansas City legend that you can check out here.