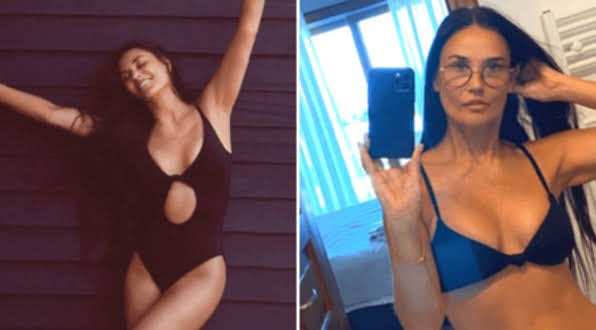 The Royals have improved their play this summer by relying on the emergence of young prospects promoted to the big leagues, but there may not be another wave of talent for awhile, if recent farm system rankings are any indication.

KANSAS CITY, Mo. - A retired military pilot in Kansas City, Missouri, who graduated from the U.S. Navy's TOPGUN program will be part of a team performing at this year's over Labor Day weekend. Retired Lt. Col. Paul Amey went through the elite pilot program , whose official title is the Strike Fighter Tactics Instructor program, in the mid-1990s.

Demi Moore shows off her svelte physique in a hot pink string bikini while on a yacht: 'Soaking up summer'

Demi Moore sizzled in a hot pink string bikini while enjoying a sun-drenched yacht outing. On Monday, the 59-year-old actress took to Instagram to share a photo in which she was seen posing in a skimpy two-piece while standing on the deck of a boat.

Left-leaning media networks, including MSNBC, ABC, and CNN, finally realized that the Inflation Reduction Act doesn't actually reduce inflation, but not until the massive spending package had already been signed into law.


MAGA Called Out For Realz

The Department of Justice has issued a sweeping grand jury subpoena to the National Archives surrounding the involvement of former President Donald Trump and his allies in the lead-up to last year's Capitol riot. The subpoena calls for "all materials, in whatever form" that the National Archives gave to the Jan.


Take The Day Off For Armageddon

Russia's defense ministry said Thursday that the Zaporizhzhia nuclear power plant in southern Ukraine may be shut down if Ukrainian forces continue shelling the facility, something Kyiv has denied doing and said Moscow's troops are responsible for.

This is the fourth part of a Fox News Digital series about "defund the police" politicians and crime in the areas they represent. Even with Big Apple murder rates similar this year compared to last, other major crimes have surged, police statistics show - and polls find New Yorkers are fed up.

Young people turning away from alcohol is generally welcomed as a positive trend. But it's bad news both for booze companies, and governments that are watching lucrative alcohol tax revenues dry up along with the populace.

It's nearly the weekend-check out these events happening in Kansas City over the next few days.

KANSAS CITY, Mo. - A Sedalia man says faith and a medical miracle gave him a second chance at life. "There's two ways I could have went," recalled an emotional Kelly Anspaugh. For years the now 61-year-old Anspaugh played tug of war with death.

Hide Transcript Show Transcript IT WAS A GOOD MOVE, GREAT WEATHER FOR THAT. THIS MORNING, YOU MIGHT SEE A LITTLE BIT OF FOG HERE AND THERE, NOT CAN I HAVE AN IMPACT ON YOUR DRIVE. THE WIND IS CALM AND 66.

Genesis - Hold On My Heart earned a spot in the Billboard 100 for 1992 and is our #TBT song of the day and this is the OPEN THREAD for right now.