This week a lawsuit against KCPD argues against (an alleged) new policy and reportedly rough treatment after a resident admonished authorities via Twitter.

By now we all know that there was ALMOST NOTHING PEACEFUL ABOUT PLAZA PROTEST and it was mostly a destructive riot that cause MILLIONS worth of damage and job losses that still impact the local economy today.

Sure, there were a few well-meaning and naive people who honestly wanted to protest peacefully but by and large the whole hot mess was a disaster that helped to turn a historic shopping district into a ghost town. 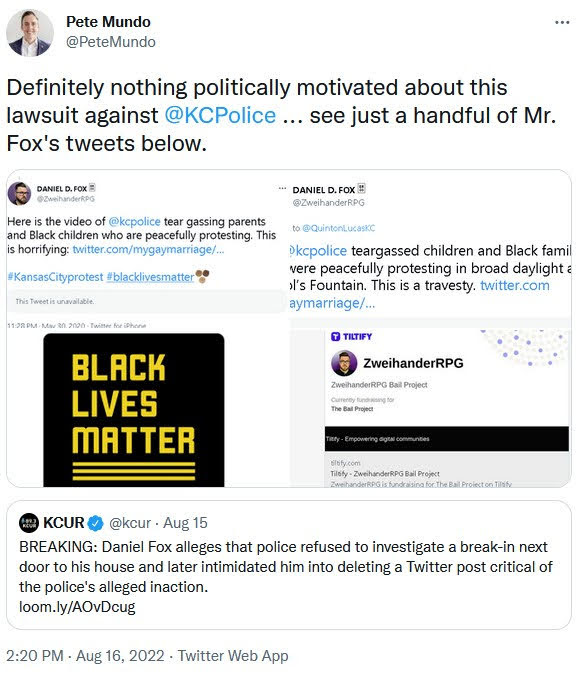 Credit to Pete Mundo . . . There might be even worse examples that crop up. He merely grabbed a fair sample of alleged anti-police sentiment.

Something else we notice . . .

MSM really jumped through hoops to describe this story.

In the early morning hours of July 15, Daniel Fox heard a loud noise coming from his neighbor's house on 53 rd and Rockhill Road. When he went outside to investigate, he discovered someone had kicked in the door. Fearful for his family's safety - he has two small children - Fox called the Kansas City Police Department.

From our vantage it's nothing more or less than a white dude claiming that police treated him unjustly because he criticized them in a public forum.

Thankfully . . . Only the dude's feelings were hurt.

TKC honestly didn't know that was cause for a federal case.

KANSAS CITY, Mo. - A Kansas City man, Daniel Fox, is accusing KCPD of implementing a new policy after the conviction former detective Eric Devalkanaere. Devalkenaere shot and killed Cameron Lamb at his home in 2019. Last November, he was convicted of second-degree manslaughter and armed criminal action.