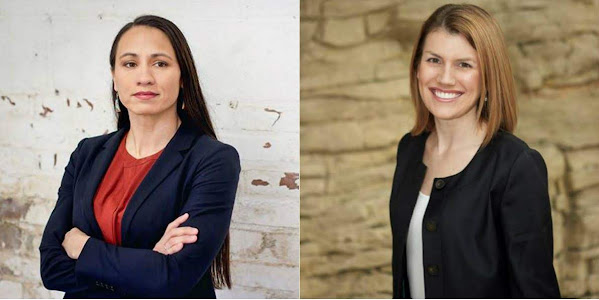 Here's what's REALLY interesting about this report . . . It's a news item that reads like a blog post and there's not much objectivity about the longstanding problems which still confront the incumbent.

Whilst we might agree that the recent abortion vote has changed the political game in Kansas . . . It's unclear if single-issue voters will show up for Rep. Davids in a way that will offset GOP gerrymandering.

Meanwhile . . . What's more lamentable is that the newspaper is going full prog blog . . .

Through the early stages of the campaign, that national momentum appeared to be in Adkins favor.

The suburban white voters that make up the bulk of the voting base in the district appeared to be losing faith in the Democratic Party they had helped give control of Congress, as the country faced record inflation and high gas prices. In July, President Joe Biden’s approval rating slipped to 38%, lower than Trump’s approval rating in 2018, when Democrats swept into control of the House of Representatives.

Then momentum appeared to shift.

Starting with the U.S. Supreme Court decision overturning a constitutional right to an abortion, which galvanized the Democratic base, then with a series of Democratic legislative accomplishments like policies to address climate change and a White House plan to forgive some student loan debt. The gains, coupled with a Department of Justice investigation of Trump’s handling of classified documents that put him back at the top of mind of voters, appeared to change the conditions.

Kansas has one of the most competitive US House seats. Does Davids or Adkins have momentum?

Republicans created fertile ground for Amanda Adkins to win the Kansas 3rd Congressional District, but shifting national momentum might stifle their chances of a successful harvest in the fall. After Adkins lost to Democratic Rep.