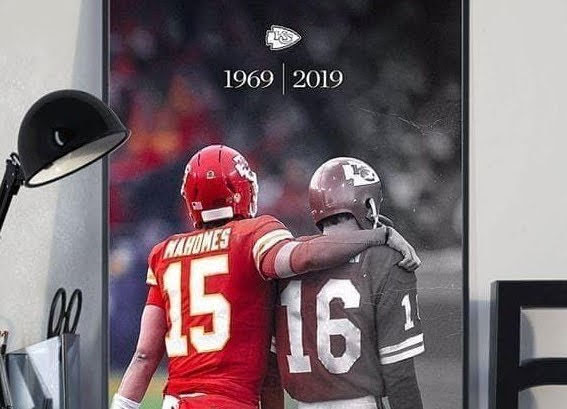 A recent report about the ailing former quarterback receiving hospice care has inspired signs of support from across the nation.

These two passages from local heroes seemed exceptionally nice and offer another glimpse of how much KC loves "Lenny The Cool" from one generation to the next . . .

“And even the iconic picture he has where he’s smoking the cigarette at halftime (of the first Super Bowl) with a Fresca,” Mahomes said, smiling. “That’s just the type of swag and confidence that he kind of brought . . .I don’t know if I have as much swag as he does.”

One morning during Tom Watson's senior year (1966-1967) at Pembroke Country Day, Kansas City Chiefs icon Len Dawson was a guest speaker at the school now known as Pembroke Hill. Watson still remembers the time of the assembly, 8:10 a.m., and his conversation afterward with Dawson.