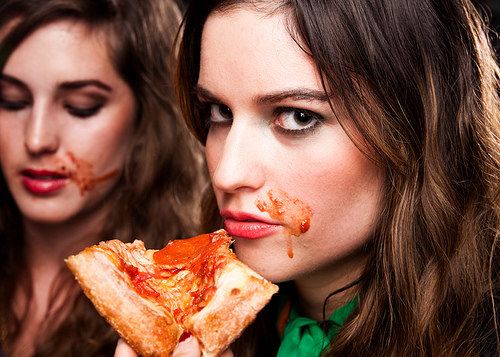 Supply chain issues continue to impact Americans and many of their favorite things.

This time around  . . . Two staples of the U.S. diet confront shortages that might or might not stem from climate change: Pizza and salsa.

Here's more on this sitch that threatens to make life just a bit more bland . . .

Processing tomatoes are specifically grown in the California region and are used for making sauces, pastes, and soups as they are not particularly juicy and very durable–which means they're good for cooking. Due to the current state restrictions limiting groundwater and the high cost of labor, fuel, and fertilizer, growers have seen soaring increases in the price to produce these tomatoes in the last few years, causing yields to steadily decline.

The USDA reported that since its peak in 2015, California's supply of processing tomatoes has dropped significantly from 14 million tons to just 11 million in 2021. The issue has largely been due to the ongoing drought the region has been experiencing.

A Tomato Shortage Could Make Pizza, Sauce, and Salsa More Expensive - Eat This Not That

For some farmers in California, weather conditions have been so bad they're unable to yield enough tomatoes to "ketchup" to retail demand. And now it's no joke that Americans may soon feel the pitch with their favorite things to eat.


Tomato shortage felt by Kansas City area pizzeria: 'We are holding out as long as we can'

LEE'S SUMMIT, Mo. - The drought in California is causing trouble for the tomato supply across the United States, including Kansas City. NBC News reports California is facing its worst drought in more than 1,200 years. KSHB 41 News spoke with Long-Bell Pizza Co.