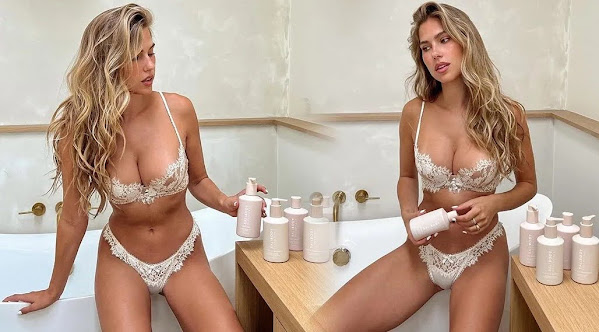 Right now hottie Kara and her promo goodness inspires this peek at the marketplace of ideas as we consider pop culture, community news and top headlines . . .

KANSAS CITY, Mo. - Crews removed a mobile home abandoned under a Kansas City overpass. Jackson County crews cleaned up the burned-out home Tuesday morning. The damaged and dumped trailer came from a nearby mobile home park, according to the county.

The Kansas City Zoo is welcoming the birth of two adorable critters. In a Facebook post on Wednesday, the zoo revealed their new red panda cubs to the world. "We might break the Internet with cuteness, but get ready to meet our precious new additions!" The zoo said in their post.

Outside look from the inside: What a visiting economic fellow found in KC (rival BBQ is just a taste)

"Immediately after I got here, I kind of noticed that I was getting the same vibes as I get in Austin: a lot of natural art, a lot of unique restaurants and stores, and kind of that weird, quirky feeling but in a good way," said Alvin Gusman.


Suburbs Will Swallow Anything

Largest kombucha taproom in the US is in Olathe

OLATHE, Kan. - It's the largest kombucha taproom in the country, and it's located in Olathe. Regulars at Tea-Biotics Kombucha on Lindenwood at Santa Fe already know about the options available at the taproom. It offers 56 different flavors including CBD-infused kombucha and slushies. Now the secret is getting out to the rest of the area.

LOOKING and feeling beautiful doesn't have to require the use of any makeup. One woman has revealed five beauty hacks she follows that don't require any actual cosmetics. TikToker and beauty guru Kara Del Toro posted a now-viral video filled with some of her best tips.

President Joe Biden plans to sign a second executive order on Wednesday meant to address the recent Supreme Court decision to end the nationwide constitutional right to abortion, as he faces pressure from fellow Democrats to be more forceful on the issue.


MAGA Not Finished Yet

Donald Trump remains a big force in GOP politics, scoring primary successes in Michigan and Arizona Trump also saw setbacks in Washington state Trump candidates now head into fall elections in which Trump will be an issue The Trump factor could decide control of the U.S.

US House Speaker Nancy Pelosi will visit Taiwan's Parliament on Wednesday morning (local time) after she became the highest-ranking American official to visit the island in 25 years.


Support For Troops After All

The Senate on Tuesday night overwhelmingly approved the PACT Act, a bill to expand health care benefits for veterans who developed illnesses due to their exposure to burn pits during military service. The 86-to-11 vote was received with cheers from the Senate gallery.


Don't Write Them Off

Embryos can be listed as dependents on tax returns, Georgia rules

Georgia taxpayers can now list embryos as dependents on their tax returns. In a news release on Monday, Georgia's department of revenue said it would begin to "recognize any unborn child with a detectable human heartbeat ... as eligible for [an] individual income tax dependent exemption".

Wikipedia is changing the editing permissions for users who try to change the page for "recession" following a disagreement over its exact definition. Wikimedia, the company that runs the online encyclopedia, will force new and anonymous users to have their updates reviewed and accepted by an editor before making their changes public on the page.

US stuck in a 'horrible plateau' of COVID-19 deaths, experts say. Here's why.

"COVID is over" might trend within social media circles, but weekly U.S. death tolls tell a different story. Despite a slight uptick in July, the pace of COVID-19 deaths has remained steady since May at about 400 a day, according to a USA TODAY analysis of Johns Hopkins University data.

The US has a veto on what Russian targets Ukraine hits with its HIMARS artillery, general suggests

The US has a veto on targets for US-supplied HIMARS, a military official hinted. Maj. Gen.Vadym Skibitsky made the remarks to British newspaper The Telegraph on Monday. A Pentagon spokesman confirmed data-sharing with Ukraine but did not comment on any veto. The US has an effective veto on Russian targets hit by HIMARS artillery, a Ukrainian general suggested.

In Taiwan, as in Ukraine, the west is flirting with disaster | Simon Jenkins

rguments in the foothills of war are always the same. Those for war shout loudest and beat their chests, eager for tanks to rumble and jets to roar. Those against are dismissed as wimps, appeasers and defeatists. When the trumpets sound and the drums beat, reason runs for cover.

Mexican Pizza is back! Taco Bell announced that the fan favorite will be returning to its regular menu starting next month. The Yum! Brands-owned chain said it was bringing back Mexican Pizza after demand for the product surged in the days and weeks that followed its announcement from three months ago that it was halting sales.

Kansas City Chiefs quarterback Patrick Mahomes has nothing but love and appreciation for Whit Merrifield, who was traded by the Kansas City Royals to the Toronto Blue Jays at the MLB trade deadline. Merrifield, who found himself in recent controversy over his COVID-19 vaccine comments, was sent to the Blues Jays in exchange for prospect Samad Taylor and pitcher Max Castillo.

The Royals traded Carlos Santana a month ago. They traded Andrew Benintendi a week ago. And today, they traded Cam Gallagher and, finally, Whit Merrifield. They should have sold off more, to be honest, because the team has been an utter disaster.

"Growing up, I remember the excitement of opening a new pair of shoes. My older brother and his friends always had the dopest sneakers that you couldn't find anywhere in Kansas City; it gave them this strong sense of individuality," the founder of A Sneakerhead's Paradise said.

The lemon pepper debut over chicken tenders at Sauced. // Photo by Tyler Shane Lemon pepper debut at Sauced. Sauced. comes out of hibernation each Spring to bless KC with their exceptional take on classic meals such as burgers, fries, and chicken sandwiches.

Beach Bunny - Entropy is the song of the day and this is the OPEN THREAD for right now.