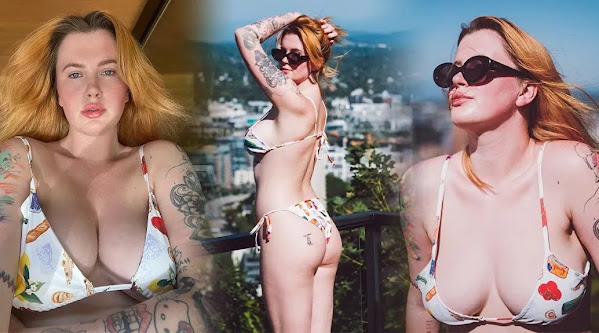 Right now we focus on the good life of a 2nd Gen actress hottie along with pop culture, community news and top headlines . . .

U.S. stock futures slipped early Friday ahead of what could be a market driving speech by Federal Reserve Chairman Jerome Powell that may offer investors much needed clues on the pace of interest-rate increases. A batch of data will come ahead of Powell, including the Fed's favored inflation gauge.

KANSAS CITY, Mo. - A new report shows inflation is hitting Kansas City Chiefs fans where it really hurts. At the tailgate party in the parking lot. The cost of everything from hotels and gasoline to hotdogs and beer is more expensive this football season.

CARTER BROADCAST GROUP Urban KPRS (HOT 103 JAMZ)/KANSAS CITY's SHAY MOORE of THE MORNING GRIND W/SHAY & SHYNE has resigned for a new chapter in her life. Her last day on the air was this morning (8/26).MOORE told ALL ACCESS, "Seven years ago, KPRS OM MYRON FEARS, BRIAN B.

KANSAS CITY, Mo. - The United States women's national team will play against Nigeria on Sept. 3 at Children's Mercy Park and to prepare for the matchup they will train at a new facility for the first time. From Aug. 29 - Sept. 1, the USWNT will call the Kansas City Current training facility home.


Hoping Nobody Gets Shot This Time Around . . .

Music festivals, multiple celebrations of the arts and brunch with food writer Liz Cook are on the table in August's final weekend. 8 a.m. - 9 p.m. One of the nation's largest disc golf tournaments is underway across multiple courses in and around Kansas City.


Actress Makes Her Own Way

Ireland Baldwin slammed rumors that she receives an allowance from her famous parents, telling followers she's a "business owner." The model, 26, clarified that while it would be "f-king sick" to get a "monthly allowance" from parents Alec Baldwin and Kim Basinger, she currently does not.

WASHINGTON - President Joe Biden lashed out Thursday night at Republicans who have embraced the "Make America Great Again" philosophy central to Donald Trump's presidency, saying it's "like semi-fascism." Biden made the comment at a fundraiser for Democrats at a home in Bethesda, Md., ahead of a kickoff rally he headlined at a high school in Rockville, Md., to mark the final countdown to November's midterm elections.

Former President Donald Trump's social media outfit, Truth Social, is locked in a bitter battle with one of its vendors claiming that the platform is stiffing the company out of more than $1 million in contractually obligated payments, FOX Business has learned.

FBI blasted after Zuckerberg revealed their warning ahead of the Hunter Biden laptop story: 'Collusion'

Twitter exploded after Meta CEO Mark Zuckerberg claimed in a Thursday podcast appearance the FBI warned Facebook about "Russian propaganda" before the Hunter Biden laptop story dropped in 2020. Speaking on an episode of The Joe Rogan Experience, Zuckerberg explained, "The FBI, I think, basically came to us - some folks on our team - and was like, 'Hey, just so you know, like, you should be on high alert...

The White House hit back at Republicans in an uncharacteristic manner Thursday by using its Twitter account to go after GOP lawmakers who are bashing President Joe Biden's move to cancel some student debt after they personally benefited from having Paycheck Protection Program loans forgiven during the Covid pandemic.


Lady Leader All Too Human

Finnish Prime Minister Sanna Marin expressed regret after a photo of two topless women kissing at her summer home was leaked on social media. The image shows two young women lifting their shirts as they kiss with a sign saying "Finland" covering their breasts. Marin is not seen in the image.

White House press secretary Karine Jean-Pierre had to shout down a belligerent reporter during her press briefing on Thursday, after the reporter expressed outrage at not being called on. The incident occurred in the final minutes of the briefing as Jean-Pierre was attempting to allow another reporter to ask a final question.

It's settled: 6.1 inches is the ideal smartphone screen size

Great news: we can all stop arguing about phone sizes. We're declaring 6.1 inches as the new standard - the ideal phone screen size, as seen in the likes of the Samsung Galaxy S22 and iPhone 13 (and probably 14).

RICHMOND, Va. - A federal ruling that gender dysphoria is covered by the Americans with Disabilities Act could help block conservative political efforts to restrict access to gender-affirming care, advocates and experts say. A panel of the 4th U.S.

Back to the moon: How to watch NASA's Artemis I mission launch

On Monday morning, nearly 50 years since NASA's final Apollo mission, the U.S. space agency will launch an unmanned rocket that will orbit the moon and lay the groundwork for manned missions there and eventually to Mars and deeper space.

BEIJING -- The U.S. government is suspending 26 flights by Chinese airlines from the United States to China in a dispute over anti-virus controls after Beijing suspended flights by American carriers. The Department of Transportation on Thursday complained Beijing violated an air travel agreement and treated airlines unfairly under a system that requires them to suspend flights if passengers test positive for COVID-19.

'The opposite of growth is death': Why the founder of EquipmentShare is driven by process, not an end goal

In the summer of 1976, Kansas City's first Ethnic Enrichment Festival was held. Since those humble beginnings some 46 years ago, the festival has become an annual event held during the third full weekend of August. Every year, thousands of local residents march under the many flags of the nations represented.

Mostly sunny and warm for your Friday, before rain chances hit for the weekend

Hide Transcript Show Transcript LATER TONIGHT FRIDAY NIGHT FOOTBALL TEMPERATURES FALLING THROUGH THE 80'S. 20% CHANCE POP UP SHOWER. SHOULD NOT WASH OUT ACTIVITIES THIS EVENING. BETTER CHANCE OF RAIN SUNDAY MORNING. SPOTTY SHOWERS OUTSIDE THAT TIMEFRAME. 66 DEW POINT, LITTLE STICKY THIS AFTERNOON. NOTHING BAD. YOU WILL NOTICE IT.

Panic! At The Disco - Sad Clown is the song of the day and this is the OPEN THREAD for right now.