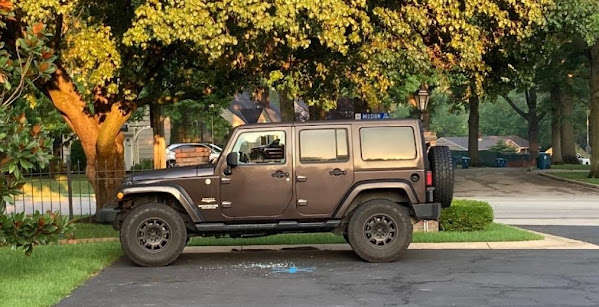 In this quick news collection we start with a photo and news sent by way of KICK-ASS TKC READERS who note a tragic bit of breaking news . .

The same is true throughout the metro as politicos debate economic numbers whilst plebs can feel the worsening U.S. economy every day.

Accordingly, in this post we share more quick deets about local crime, police action, court cases and hope that neighborhoods will continue to help police.

America's Most Violent and Peaceful States

Violence is more commonplace in the United States than it is in much of the rest of the world. Using several key measures - including military assets and spending, crime rates, and political stability - the 2022 Global Peace Index, published by the nonpartisan think tank Institute for Economics & Peace, ranked the U.S.

Sinking Poll Numbers Force Democrats To Switch Course Two years after the Left's agenda to "Defund the Police" swept the United States, a national crime wave and its negative implications for Democrats in the 2022 elections has forced the 'police defunders' to abandon the campaign.

TOPEKA - A defense attorney asked the Kansas Court of Appeals on Tuesday to reject the basis for subjecting a woman to a lifetime of probation because she can't afford to pay restitution for her crimes.

A man behind the wheel of an SUV opened fire on a taxi driver, and the wounded driver fired back, according to Missouri police. The violent road rage incident started with an argument between the taxi driver and a man in a Dodge Durango, around 2:30 p.m. on Aug.

KANSAS CITY, Mo. - The student who allegedly opened fire inside an assistant principal's office in March at Olathe East High School appeared Wednesday in Johnson County District Court. Jaylon Elmore, 19, who has been charged with attempted capital murder , and his attorneys requested a continuance at the scheduling conference, which was granted.

OVERLAND PARK, Kan. - Safety is top of mind for families all over the Kansas City area as school districts start welcoming students back to the classroom. The KC Crime Stoppers rolled out an app years ago that allows students to tell administrators about anything that makes them feel unsafe.

KANSAS CITY, Mo. - There are several community groups doing violence prevention work through a new initiative that brings them together under one roof. The rampant violence in Kansas City, Missouri, keeps ripping families apart. More than 100 people have died at the hands of another so far this year.