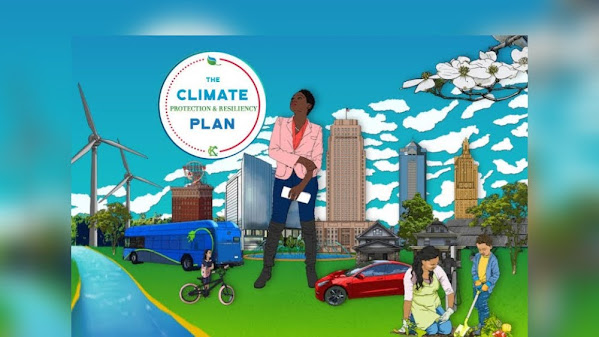 As always, a great deal of city hall discussion is performative and nothing more or less than local partisan allegiance.

There is a very real world impact on those of us on the lower end of the food chain who don't have time to protest or advocate at 12th & Oak bull sessions for the cameras.

EXPECT NEW CLIMATE RULES TO SPIKE THE COST OF LIVING IN KANSAS CITY!!!

Right now utilities & builders are complaining about the rules but the debate will eventually fade and, as always, the prices will be passed along to consumers . . . Apparently because the world will end and the sky will fall if not.

Here's a glimpse at the debate in the less than 12 years of time we have left together  . . .

The Climate Protection and Resiliency Plan brought deep concerns to private utility companies like Spire and Evergy because if the city is successful in advocating for regulatory changes then they would have to make modifications in how they operate.

This plan now means solar panels and wind energy will be priority over fossil fuels and some utility companies fear the plan would turn focus from natural gas.

“We heard from a lot of folks,” Stephen Mills, Vice President of Spire Missouri West, said. “We do feel like there were some improvements made from the original draft, but we also feel it didn’t go far enough.”

During the committee meeting Wednesday, the amendment was modified.

The committee removed the verbiage of clean electricity to clean energy because it’s a more expansive term.

KANSAS CITY, Mo. - After hours of public comment, the Kansas City's Transportation, Infrastructure and Operations Committee voted in favor of Kansas City's Climate Protection and Resiliency Plan. The plan aims to achieve carbon neutrality for city operations by 2040, but some utility companies in the city are unsure about the plan.

Update . . . It passed and now here's the victory lap from local Eco-activists . . .

Plan supported by residents and a broad range of community, environmental, and justice organizations

The CPRP was developed over the course of almost two years. The process included over a dozen steering committee meetings, six public stakeholder hearings, and a public input period that garnered over 700 comments to guide Kansas City in achieving goals set in Resolution 200005. Kansas City passed the resolution in 2020 and committed to achieve 100% reduction in greenhouse gas emissions from electricity consumption citywide by 2030 and become “climate neutral” by 2040, and make climate protection and greenhouse gas reduction key factors in all city decisions.

Intervening in state regulatory proceedings to advocate for the city’s electricity provider, Evergy, Inc., to retire its Hawthorn coal plant by 2025 and all its coal plants by 2030; and


The CPRP goes into effect immediately at a time when both Evergy and Spire are requesting permission from state regulators to increase customers’ gas and electric bills.

“This is a great day for Kansas City, MO and the region. This bold plan is the result of more than two years of community engagement and people-centered plan development, not to mention years of advocacy by residents and grassroots organizations calling for action to address the climate crisis. The plan commits Kansas City to being a leader in reducing harmful fossil fuel use while dismantling an unjust status quo that has caused the most vulnerable residents in our community to bear the brunt of these harmful burdens. All Kansas Citians, and those who work in city hall, should be proud. The community is behind the council and will continue to work with city leaders and our friends and neighbors to ensure that it is fully implemented to ensure better climate and environmental policies that will help all in our community thrive.”

"The process of getting this plan over the finish line exposed on public record the lies, fear-mongering, and dirty tactics that Evergy and Spire executives are willing to use to split communities over climate action. They not only used our rate-payer money to try to get their way in the backrooms of Council, but they also attempted to disrupt public participation processes for this plan and divide workers and marginalized communities. However, today they did not win. Young people with Sunrise Movement KC organized a robust coalition of tenants, workers, parents, and other advocacy groups to overcome them and strip this plan of false solutions like relying on renewable natural gas and prioritize closing Evergy's dirty Hawthorn coal plant by no later than 2025. This plan is a non-binding framework, and we expect Evergy and Spire will continue to fight some of its most transformative parts. We will continue to organize for even bolder, intersectional climate action, including a Green New Deal. Today should send a message to this council: the people of Kansas City aren't going anywhere."

I am thankful for Mayor Lucas and the Council's leadership to get this adopted today. This is a huge win for our kids and gives me peace of mind as a parent that our leaders are taking bold action to protect our children. I'm especially glad the City set a goal for retiring the Hawthorn plant by 2025. I'm really proud of Kansas City today.

Kansas City Missouri Climate Protection and Resiliency plan (CPRP) must prioritize and ensure that the most  overburdened communities do not continue to be sacrifice zones. “ CleanAirNow applaud all the efforts from the community who showed up to testify and are actively identifying what the implementation of this plan looks like.” CleanAirNow is an environmental justice organization in Kansas City who provided a 40 page environmental justice recommendations on the KCMO CPRP explicitly highlighting the need for applying a public health and environmental justice element in the implementation of the plan. Today, people are exposed to multiple environmental health hazards, while living in unhealthy housing conditions and/or experiencing poverty and other socioeconomic stressors that are associated with negative health outcomes.

It is time for the utilities to plan for a “just transition.”  Meaning, those working in jobs that are exposed to harmful pollutants  are essential constituents in the movement for a just transition to a zero emission economy through training and workforce development. Many workers not only work in industries (such as the coal plant) that expose them to toxins and impact their health but also live in fenceline communities disproportionately bearing the burdens of pollution. We need a just transition to create healthy, quality jobs that can provide much needed relief to Black, low-income Americans facing the highest risk from power plant pollution. CleanAirNow is positioned to identify those funding opportunities without displacing the workforce, and are planning to meet with labor unions, utilities and the city.

Here's the aftermath update from City Hall on the topic . . .

With an eye on the City's future, and the future of generations of Kansas City residents, the city council on Thursday adopted the Kansas City Climate Protection and Resiliency Plan. This equity-centered plan has a primary goal to achieve climate neutrality by reducing greenhouse gas emissions for city operations by 2030 and citywide by 2040.

Kansas City took a major step to reach carbon neutrality Thursday with the passage of the Climate Protection and Resiliency Plan . The plan was formed over two years by a city-appointed steering committee with public input and will serve as a roadmap for the city's future climate policies.