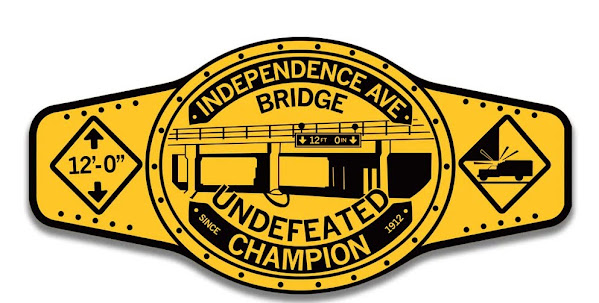 "We've tried NOTHING and we're all out of ideas."

The situation is a longstanding joke . . . In fact, a sticker we recently purchased celebrates the longstanding local tradition.

Here's a peek at worsening frustration . . .

One man from the community commented on Friday he sees trucks fly through here as fast as 75 to 80 miles per hour. In the recent past, city leaders said they were considering an early warning system to notify truckers of the bridge’s height. However, on Friday, a city spokesperson told FOX4 that plan and a few others are still being considered.

“They should pay a little more attention to what they’re doing. There’s a big sign there that says 12 feet. It tells them right there they shouldn’t go underneath there,” Harry Brown, who resides in the Old Northeast, said.

“The city said they were going to do a lot of things. They haven’t done anything yet. It’s up to the city to do something about this or this is going to keep happening,” A.J. Guerler, another neighbor, said.

KANSAS CITY, Mo. - It happens a lot in the Kansas City's Old Northeast neighborhood. On Friday morning, the Independence Avenue Bridge claimed its latest victim as another tractor trailer crashed into the bridge's underside. The big rig truck in question was filled with fresh produce.