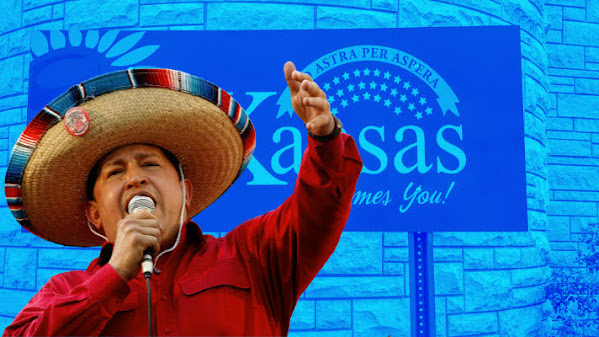 However, for some, it's much easier to blame a long-dead Latino commie than come to terms with the fact that we live in a Democracy and some people are destined to disagree with one another.

Just for giggles and because musical theater is a guilty pleasure; here at TKC we blame everything bad that happens in our life on the Puerto Ricans.

Tonight JoCo SOB goes on a tear regarding the topic and this line stood out . . .

"If you see Mark (Gietzen), panhandling in Topeka to cover his recount bill, ignore him, the money will be used to recount ProBowl votes."


Kansas recounted 550,000 ballots after the abortion amendment lost. Only about 60 votes changed

Kansas conservativeswere just taught a valuable lesson: No means no. On Sunday, officials concluded the partial recount of a landslide, statewide vote rejecting a constitutional amendment that would have allowed the legislature to ban abortion completely. And the recount predictably affirmed the results: Kansans resoundingly declined the amendment.


A partial recount in Kansas affirms a vote over abortion rights.

The state's voters overwhelmingly rejected an anti-abortion constitutional amendment earlier this month. Send any friend a story As a subscriber, you have 10 gift articles to give each month. Anyone can read what you share.


Mark Gietzen - Is not a political power in Kansas, don't believe the hype

The dipshit went ahead with the recount, funding most of it out of his pocket, and guess what? The vote chaged by 93 votes..... I am pretty sure that number is not enough to undo the margin of victory, but I am sure Mark has math to prove that it just might.