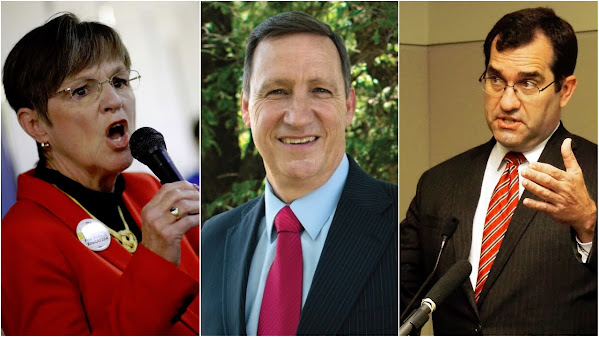 An inconvenient bit of local democracy might have just turned the tables in Kansas.

This dude is not a RINO . . . He's a true believer and just might convince the faithful to pass over the mainstream conservative and vote their conscience . . . Thereby securing another victory for Guv Kelly.

Our MAGA friends will look like cretins if they bad mouth this grassroots Kansas Christian conservative campaign.

Kansas State Senator Pyle is a Hiawatha resident who served one term in the Kansas House and currently serves in the Kansas Senate, District 1, which covers five counties in NE Kansas. Since Pyle and Garrison missed the deadline to file for the Governor’s race, they were required to gather 5,000 signatures in order to appear on the November ballot.

“The effort already expended to get on the ballot will pale in comparison to the task that lies in front of us. We now must launch our campaign to inform our neighbors about the stark differences between our conservative beliefs and the radically liberal public policy views of our two opponents, Kelly and Schmidt. Kathleen and I are the conservative opposites of Kelly and Schmidt. If Kansas voters embrace our message of limited government and greater freedom and favor us with a victory on November 8th, we will begin to immediately reverse the overreaching government policies we have all suffered under for the last four years.”

HIAWATHA, Kan. (WIBW) - The Dennis Pyle campaign for Governor was notified Thursday by the Kansas Secretary of State's Office that they have certified the required 5,000 signatures which officially puts Senator Pyle and his running mate, Kathleen Garrison, on the November 8th ballot for the office of Governor and Lieutenant Governor.