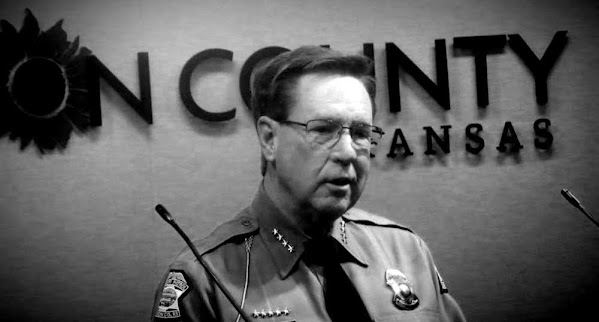 Before anyone gets too excited . . . Until his next election, there's not much that locals can do about all of prog blog angst propagated dutifully by barely employed local scribes.

THERE HAS BEEN VERY LITTLE LOCAL CONSERVATIVE MEDIA DEFENSE OF AN EMBATTLED JOCO LAWMAN . . . AND REELECTION WILL BE DIFFICULT IF NOT IMPOSSIBLE!!!

There's a lot of hype about legislative action but that's unlikely  . . .

Instead and because it's our mission to separate the politics from the hype & vice versa . . .

All of this might be an early sign of an early push to replace this right-wing elected law enforcement leader.

But as Kansas Secretary of State Scott Schwab has made clear, there simply is no evidence of specific criminal activity for Johnson County Sheriff Calvin Hayden Hayden’s election integrity probe to collect. The best Hayden seems to be able to do to imply that he reasonably believes fraud occurred because the 2020 presidential election was the “first time since 1914 that Johnson County didn’t vote” for the Republican nominee.

The Kansas Reflector welcomes opinion pieces from writers who share our goal of widening the conversation about how public policies affect the day-to-day lives of people throughout our state. Max Kautsch is an attorney whose practice focuses on First Amendment rights and open government law.