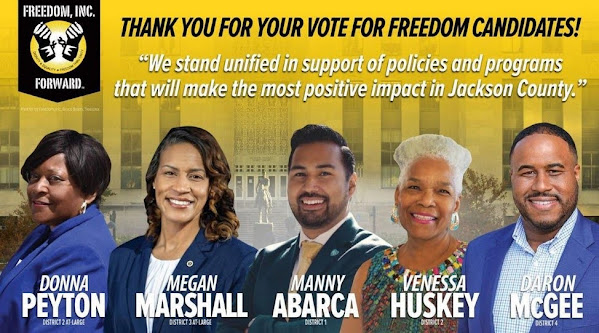 FREEDOM, INC. HAS LIKELY EARNED A MAJORITY ON THE JACKSON COUNTY LEGISLATURE WITH A STRING OF ENDORSEMENT VICTORIES TONIGHT!!!

Voting aftermath and an off-the-record quote from insiders . . .

People of color will soon comprise more than half of the elected officials in Jackson County.

This is significant given that the latest census shows us that whites total 70% of the county's racial makeup.

And so, no matter your politics . . . This is a very real sign of progress for the voters of Jackson County.

- Former Marine Megan Marshall absolutely TROUNCED incumbent Tony Miller - The property tax crisis and a lack of a base likely precipitated his downfall.

- Donna Peyton's win is notable because she was up against a much younger opponent who has experience in politics and some financial support . . . Also, Zac Sweets is the best name in all of KC politics and we hope that he keeps up his involvement. Still . . . More than anyone else, Freedom, Inc. carried Ms. Peyton to the finish line.

The postscript and something that can't be denied . . .

Having recently celebrated their 60th anniversary, Freedom, Inc. stands as the most influential political organization in Kansas City.