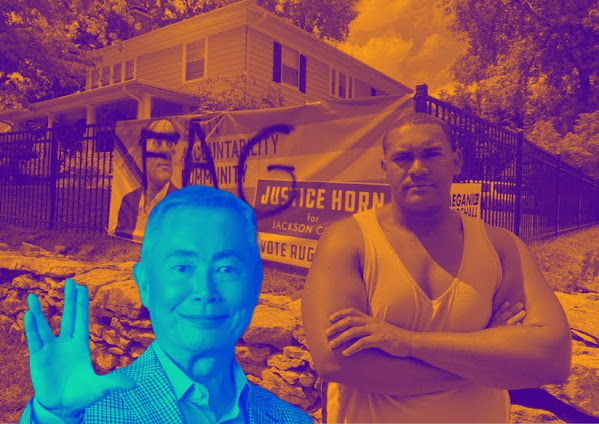 First, a look at the fun and encouraging . . . A Jackson County candidate and local activist earned a shout out from a beloved Star Trek actor . . . 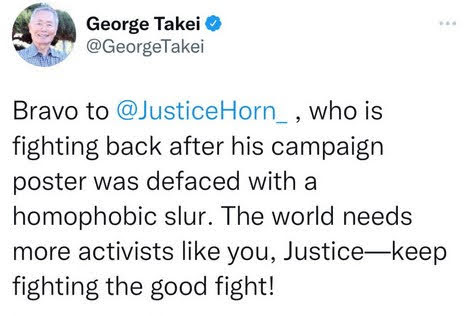 HOMOPHOBIA IN THE HEARTLAND: AFTER CAMPAIGN BANNER DEFACED WITH HOMOPHOBIC SLUR, JUSTICE HORN TO REPORT INCIDENT TO THE FBI FOR REVIEW

Justice Horn will report this week’s incident to the FBI’s Kansas City office.

KANSAS CITY, Mo. (July 7th, 2022) – Justice Horn, candidate for Jackson County Legislature sign defaced on July 3rd in Midtown Kansas City, Missouri. Justice Horn is the first openly gay person of color to seek this county seat and if elected, would be the first openly gay county offical in the state of Missouri. Justice is no stranger to hostility as he’s received open threats during the Black Lives Matter movement in 2020, which also includes the defacing of a Black Lives Matter mural last year here in Kansas City at our Briarcliff location in the Northland.

Justice Horn: “After hearing from 2 community members who witnessed the individual who defaced my campaign banner with a homophobic slur, I have decided to report this week’s incident to the Federal Bureau of Investigation’s Kansas City office, specifically their hate crimes division.

First, I want to thank the two community members who came forward and stated they’d help identify the individual who targeted not only me, but the entire LGBTQ+ community. I have immense faith in the FBI’s work to ensure that this is a fair and thorough process.

Lastly, I want folks to understand that this issue is bigger than myself. We have to call out, challenge, and hold accountable those who seek to do harm to our community. This can become a slippery slope that’ll lead to more egregious anti-LGBTQ+ acts. We have to stop this here.”