Who Fists Better: AOC Or Hawley?!? 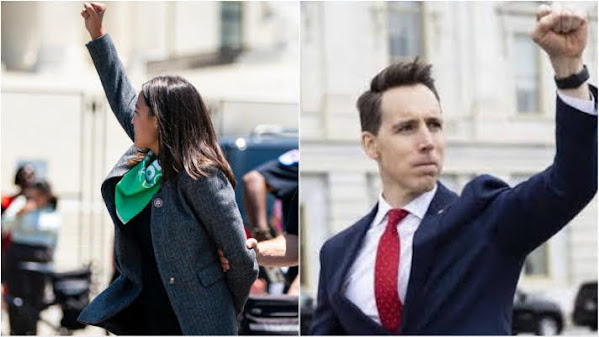 Credit to both of these politicos . . .

And so we turn to this mag to make a slightly more cogent argument . . .

Videos show both Ocasio-Cortez and Democratic Rep. Ilhan Omar of Minnesota with their hands behind their backs as if in handcuffs while they were led away by Capitol Police, with Ocasio-Cortez raising her fist to a group of protesters as she and another woman are escorted away from the Supreme Court.

Besides broadcasting that Ocasio-Cortez was not actually handcuffed, the gesture was strikingly similar to one that got Republican Sen. Josh Hawley of Missouri compared to a Nazi, smeared by former supporters, and even blamed for violent actions at the U.S. Capitol last January.

Don't hold your breath waiting for editorials about AOC's fist-pump in support of an industry that has the blood of millions on its hands.