Today we are tragically surprised by so-called "progressive" activists targeting a church.

At this point it's important to note that our blog community has been monitoring this trend for the past month.

Here's a glimpse at the discourse in Johnson County escalating to dangerous levels . . .

We're not sure if a highly political Kansas archbishop is going to make things better: 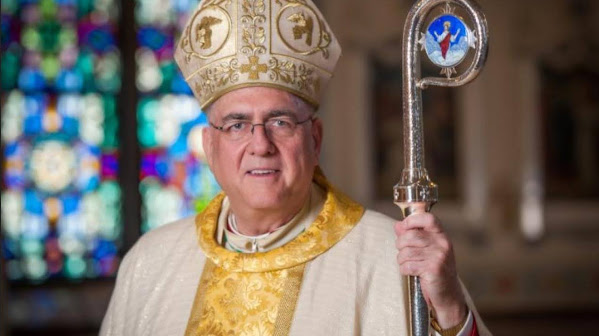 There have been no arrests in the case as of yet. A full police report is expected to be released this week.

Archbishop Joseph F. Naumann of the Kansas City in Kansas Archdiocese issued this statement on the vandalism:

“An escalating pattern of theft, vandalism and intimidation targeting members of the Catholic Church and other supporters of the Value Them Both amendment reached a new level overnight when the Church of the Ascension in Overland Park fell victim to an overt act of hatred and incivility.

Parish buildings, including a statue of the Blessed Mother, were extensively defaced with red spray paint. Authorities were notified and we ask that every action be taken to identify and hold the perpetrators of this despicable act accountable.

This attack and others targeting Catholic churches in Kansas and across the country are not only vulgar but un-American. The intention is clearly meant to intimidate and threaten the Church’s pro-life beliefs and position of support for the Value Them Both amendment. We will not be deterred.”

'My body, my choice' painted on door of Overland Park church

OVERLAND PARK, Kan. (KCTV) --- A church in Overland Park, Kan., was vandalized overnight with pro-abortion rights messaging. Police confirm they were called out to the church shortly after 1 a.m. on Sunday morning on a report of vandalism. In photos provided to KCTV5 News, "My Body, My Choice" was spray-painted on the door of the church.

Overland Park police are investigating a case of vandalism at Church of the Ascension that they say happened early Sunday morning.Police tell KMBC 9 the vandalism happened around 1 a.m. Sunday at the church located at 127th Street West of Antioch Road.

WICHITA (KAKE) - Sunday afternoon, crews with ABC News traveled with Lacey Cruse as she went door-to-door to speak about the upcoming primary. "(The vote) really shines a light on how important this vote is an August 2nd and how many people are really paying attention to it," Cruse said.


The Value of Voting: Kansans to decide future of abortion rights

IS HEART OF THE MATTER. CODY: THANKS FOR JOINING US, I AM CODY HOLYOKE. WE BEGIN WITH AN ISSUE THAT DIRECTLY AFFECTS THE RIGHTS OF MORE THAN HALF OF ALL AMERICANS. BECAUSE OF A MAJOR RULING, WOMEN ACROSS THE COUNTRY ARE WEEKS INTO THE NEW REALITY IN WHICH NATIONWIDE ABORTION RATES ARE GONE.


Kansas finds itself front and center in the abortion battle

KANSAS CITY, Mo. - A week after the U.S. Supreme Court ruled there is no federal constitutional right to an abortion, sending the battle ground back to the states. Kansas finds itself on the frontline of the fight.


"Heart of the Matter" explores political side of abortion issue

Hide Transcript Show Transcript CODY: NO MATTER HOW YOU STAND ON ABORTION AND REPRODUCTIVE RIGHTS, YOU CAN'T DENY IT HAS BECOME A DEEPLY POLITICAL ISSUE. ESPECIALLY WITH THE ROE V. WADE REVERSAL. AT THE HEIGHT OF A CAMPAIGN SEASON. JOURNALISTS HAVE BEEN WATCHING TWO ELEMENTS, MIKE MAHONEY IS AROUND, ALONG WITH THE SENIOR POLITICAL REPORTER JOINING US FROM TOPEKA.