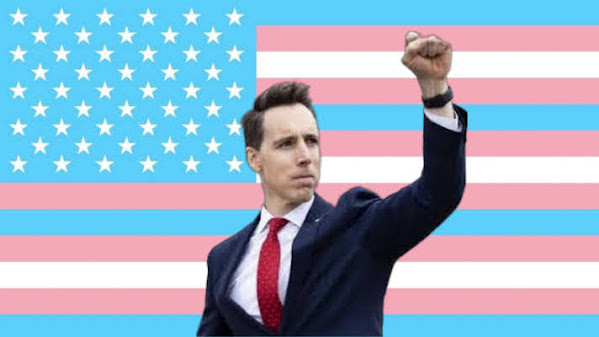 This bit of political theater has already incited anger and a barrage of angry tweets for the midday.

The Missouri Senator was actually rather impressive for his calm . . . The idea of pregnant dudes makes most Show-Me state men throw a fit. His line of questioning was appropriate despite the hyperbolic reaction and allegation.

Also . . . This is much more fun than thinking about Hunter Biden banging hookers two at a time.

"Prof. Khiara Bridges, pushing back against Sen. Josh Hawley's (R-MO) line of anti-abortion questioning: “I want to recognize that your line of questioning is transphobic, and it opens up trans people to violence.”

"Do you believe that men can get pregnant?" she asked.

"No! I don’t think men can get pregnant," Hawley replied, leading Bridges to state that this means he denies the existence of trans people.

"Wow, you're saying that I'm opening up people to violence by asking whether or not women are the only folks who can have pregnancies?" Hawley asked.

Berkeley professor to Hawley: 'Your line of questioning is transphobic'

Berkeley law professor Khiara Bridges rebuked Sen. Josh Hawley (R-Missouri) during a Senate hearing on Tuesday, accusing him of peppering her with a line of transphobic questioning. Bridges during an exchange with Hawley at the hearing cited suicides by trans people, and accused Hawley of asking questions that could lead to violence against that community....


Hawley, law prof clash in heated exchange over who can get pregnant: 'Is this how you run your classroom?'

A Senate Judiciary Committee hearing on abortion and the legal consequence of the Supreme Court's decision in Dobbs v. Jackson Women's Health Organization blew up during a tense back and forth between Sen. Josh Hawley, R-Mo., and Berkeley Law Prof. Khiara Bridges when the senator questioned her characterization of who can get pregnant.