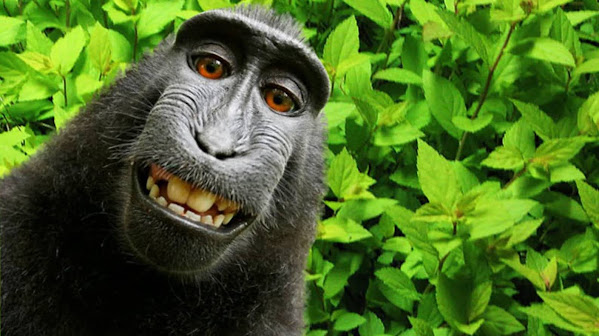 Again, more than anything we love this selfie because the copyright belongs to a cheeky monkey who snagged a photographer's gear.

Yes, we're being a bit snarky with our coverage . . . But sadly, and more importantly, the White House doesn't seem to be taking this latest plague seriously either . . .

The KDHE said this is the first presumptive positive case in Kansas.

Health officials said the man recently traveled out of state. The KDHE said he is working with health officials to identify any recent contacts who might have been exposed.

"The risk of monkeypox spreading in Kansas remains low,” Janet Stanek, secretary of KDHE, said. “If you are experiencing symptoms of monkeypox illness, it's important to stay home and contact your health care provider as soon as possible to avoid spreading the disease to others."

OLATHE, Kan. - The Johnson County Department of Health and Environment and the Kansas Department of Health are announcing a single presumptive monkeypox case in an adult male Johnson County resident. JCDHE is waiting test results from the Centers for Disease Control and Prevention. The person did not travel outside the country, did not require [...]

A Johnson County man has tested "presumptive positive" for monkeypox, according to the Kansas Department of Health and Environment.The KDHE said this is the first presumptive positive case in Kansas. Health officials said the man recently traveled out of state.

Just get us the shots, Joe! Top Democrats running to represent the heart of the Big Apple's LGBTQ community in Congress ripped the Biden administration Friday for letting red tape tie up the importation of 1 million doses of much-needed monkeypox vaccine.

As California and the nation at large anticipate increased transmission of monkeypox - a virus that spreads through close, skin-to-skin contact and has spread rapidly among gay and bisexual men - two Bay Area lawmakers are criticizing the Biden administration over shortages of the monkeypox vaccine.

Millions of additional doses are on their way and will arrive in coming weeks and months, officials said.


Monkeypox dilemma: How to warn gay men about risk without fueling hate

Monkeypox had arrived in Salt Lake County, with two men testing positive after returning from Europe, the epicenter of a global outbreak concentrated in gay and bisexual men. Officials there faced a dilemma. They wanted to warn men who have sex with men that they were at higher risk for exposure to the virus.


How contagious is monkeypox-and should you get a vaccine? Here's the latest.

In a world exhausted by two-plus years of the coronavirus pandemic, another disease, monkeypox, continues to spread more rapidly than ever before. It's a very different virus from the one that causes COVID-19, and is much harder to transmit, but it can land patients in the hospital and even kill.