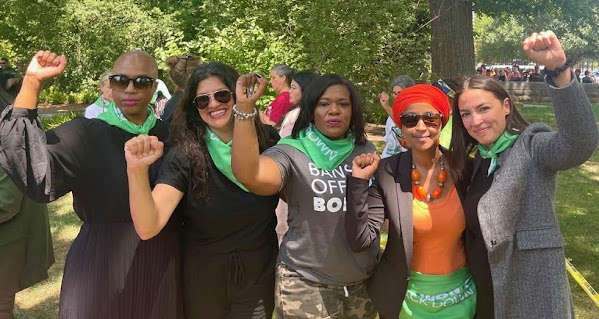 I think it's more interesting that her office wants to unionize . . . Even if she's cool with it.

The 17 members of the U.S. House of Representatives and abortion rights advocates began walking together from the steps of the Capitol toward the Supreme Court building around 1 p.m.

Fifteen minutes later, they sat down in an intersection in front of the fenced-off Supreme Court building as a U.S. Capitol Police officer warned they were involved in illegal demonstration activity and would be arrested if they didn’t move.

A few minutes later, as lawmakers and protesters chanted in support of abortion rights, U.S. Capitol Police officers began leading them away to a shaded, grassy area nearby where they would be charged with crowding, obstructing or incommoding under District of Columbia law and told they needed to pay a $50 fine.

WASHINGTON - More than a dozen members of Congress were arrested Tuesday alongside abortion rights activists after they sat down and blocked an intersection between the U.S. Capitol building and the Supreme Court to protest conservative justices' decision to overturn Roe v. Wade.


AOC is among Dems of Congress including fellow Squad members ARRESTED

Ocasio-Cortez was seen walking escorted away by police with her hands crossed behind her back, as if she were in handcuffs, but she was not Others arrested include Reps. Ilhan Omar, Ayanna Pressley, Cori Bush, Bonnie Watson Coleman and Katherine Clark A total of 34 arrests - 16 of them members of Congress - were made at the demonstration Tuesday, according to Capitol Police Progressive Reps.

At least 17 House Democrats were detained Tuesday at an abortion rights rally protesting the Supreme Court decision that overturned Roe v. Wade. Driving the news: U.S. Capitol Police said that it started arresting demonstrators after they failed to follow their three warnings to stop blocking a street in Washington, D.C.


Ocasio-Cortez, Omar pretending to be handcuffed after arrest at protest blows up Twitter: 'This is too much'

The images of Rep. Alexandria Ocasio-Cortez, D-N.Y., and Ilhan Omar, D-Minn., seemingly pretending to be handcuffed on Tuesday as they were escorted away from the Supreme Court by police drew amusement and ridicule on the right. Along with left-wing "Squad" members like Rep.


AOC fakes being handcuffed after arrest at abortion rights protest

Far-left Rep. Alexandria Ocasio-Cortez was roundly mocked on social media Tuesday after she put her arms behind her back as if handcuffed following her arrest at a pro-abortion demonstration outside the Supreme Court. The Bronx and Queens Democratic lawmaker was gently escorted away by a Capitol Police officer - along with fellow city Rep.