Cancelling the horses was one of the most unpopular decisions of former KCPD Chief Smith that met with universal objection across the metro.

In order to deal with increased crowd control demands following a spate of downtown gunfire this weekend, Mayor Q put forth a welcomed retro idea today . . . 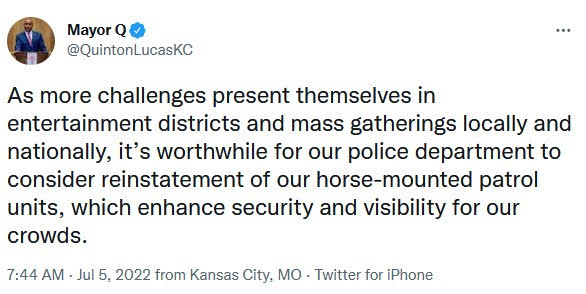 Mayor Q's suggestion was universally panned on Twitter by progressive activists who demand more gun control and "equity" rather than preventative solutions and police that neighborhoods have long requested.

And so we turn the question over to our blog community . . .

DO YOU SUPPORT THE RETURN OF KCPD'S MOUNTED PATROL???

We encourage readers to think outside the box here . . . Just because Mayor Q put forward this idea doesn't mean it's a bad one.

Rather than just complaining about alleged racism or oppressive law enforcement tactics . . . Let's not forget that so many longtime residents really LOVED the mounted patrol and appreciated the community outreach and crowd control effort.

KANSAS CITY, Mo. (KCTV) - Kansas City Mayor Quinton Lucas on Tuesday morning suggested the police department should consider bringing back its mounted patrol unit, which was disbanded over two years ago to fill staffing for other violent crime divisions.

KANSAS CITY, Mo. - The Kansas City, Missouri, Police Department's mounted patrol unit may soon return to city streets. The unit, which was disbanded in Jan. 2020 to reallocate resources to KCPD's homicide unit, could help as the city continues to find ways to turn back crime, especially during events and entertainment districts.

KANSAS CITY, Mo. - A day after a deadly shooting during a July 4th parade in a Chicago suburb left six people dead, Kansas City Mayor Quinton Lucas is calling for the return of horse-mounted police in the city.