A controversial morning note from the Kansas City Star, once again, reminds me of the early days of this blog.

Some readers, local pundits and colleagues worried that I was going to get punched in the face for my political writing.

At the time this was a concern because few people in Kansas City history had openly mocked local political leaders, shared behind the scenes chatter . . . Or confronted a sitting Mayor and his wife.

Luckily . . . It turns out that the rise of social media gave hot-headed Internets denizens something else to do and our niche expanded toward thoughtful readers who wanted just a bit of inside scoop served with an unhealthy topping of pop culture and a few other passing interests.

Over the years, thanks to guidance from our most dedicated readership, TKC has noticeably mellowed and transitioned into something of a resource and a space that values the LULZ and COMMUNITY over any partisan hackery.

And all of this background serves to provide our perspective on today's commentary from the largest daily newspaper in the metro.

THE KANSAS CITY STAR IS USING FIGHTING WORDS FOR AN EDITORIAL SCREED THAT'S NOT ANYTHING CLOSE TO JOURNALISM!!!

Most of the plebs don't know this but commentary is a valuable part of journalistic discourse and the Pulitzer committee even awards prizes for it . . . The newspaper even touts a loose connection to this kind notable honor.

Whatever readers think about the newspaper's screed . . . Agree with it or otherwise . . . Let's not confuse name-calling and sensationalized allegations with journalism.

Their takeaway is playground bullying at best . . . It's actually something more akin to prison yard jabber.

Here's the crux of their argument:

A signature Hawley issue is masculinity — as in, how little of it American men seem to have these days. It’s a frequent topic in his speeches and on his podcast, where “the left-wing attack on manhood” is a dire threat to our society. Regnery Publishing is set to release his book “Manhood: The Masculine Virtues America Needs” next year. Twitter didn’t see much bravado as he ran from the mob on Luria’s video. But funny as the visual was, there is absolutely nothing amusing about Jan. 6, 2021.

We said that day that Hawley has blood on his hands for his role in perpetuating the lies that drove thousands of people to violence. That remains true.

And now we'll share a screen cap of the newspaper degrading the quality of journalism in Kansas City: 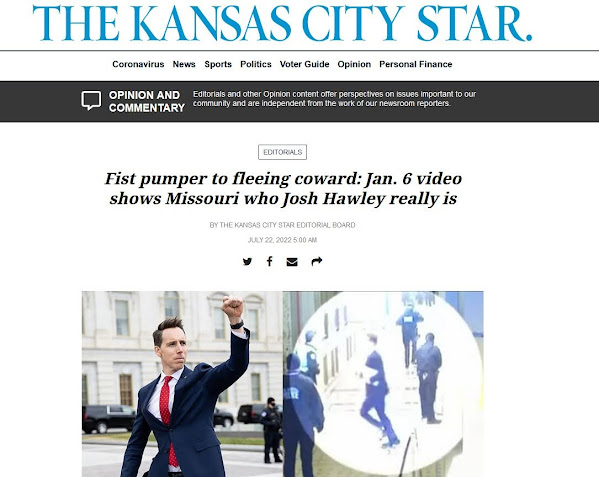 OPINION AND COMMENTARY Josh Hawley is a laughingstock. During Thursday night's televised hearings of the House committee investigating the Jan. 6, 2021, coup attempt at the U.S. Capitol, Rep. Elaine Luria played video of Missouri's junior senator that will surely follow him the rest of his life.