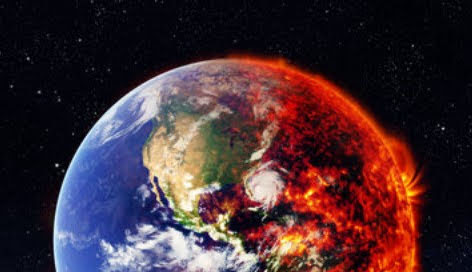 But first as bit of a programming note . . .

Recently, this blog took some heat for even implying that climate change was a possibility . . . Even if we tempered our commentary with our favorite hackneyed & recycled jokes at the expense of AOC.

Don't worry, we can take the bloggy heat if only in service of firing off and sharing some of our favorite stories of the day.

KANSAS CITY, Mo. - Kansas Citians cast aside the high temps Saturday afternoon and took to the banks of Brush Creek for a lantern lighting Saturday night. At sundown Saturday night, dozens of families at Theis Park in Kansas City, Missouri walked south toward Brush Creek, where they dropped water-proof lanterns into the water.

The race for the U.S. Senate is heating up in Missouri. Two candidates from both sides of the aisle were in the Kansas City metro area Saturday prior to the Aug. 2 primary.Missouri Attorney General Eric Schmitt and U.S. Senate candidate Trudy Busch Valentine both met voters at their respective campaign events Saturday.

KANSAS CITY, Mo. - For the first time since summer 2018, the temperature at Kansas City International Airport has reached 100 degrees. July 12, 2018 was the last time the KC metro reached this high of a temp. The last time Kansas City saw temperatures over 100 was on September 8, 2013.


Learn To Live With Sweat

A popular Mexican fitfluencer and bodybuilder tragically died July 7 after apparently undergoing a botched operation to remedy her profuse perspiration. Odalis Santos Mena, 23 - who regularly uploaded pics of her ripped physique to her 147,000 Instagram followers - was reportedly recruited by the SkinPiel clinic in Guadalajara to promote a breakthrough antiperspirant treatment called MiraDry.


White House Vs. Next Plague

Officials at the Food and Drug Administration and Centers for Disease Control and Prevention are also working to make tecovirimat, the only treatment available for monkeypox (though only FDA-approved for smallpox), easier for physicians to prescribe to patients. A more streamlined process to get the antiviral is expected to be announced to providers next week.


Billionaire Tabloid Vs. The Don

The man accused of attempting to stab New York gubernatorial nominee Rep. Lee Zeldin onstage at a campaign event has been arrested on a federal assault charge, a spokesperson for the US Attorney's Office in the Western District of New York said, after he was released on his own recognizance shortly following an initial arrest Thursday.

Taylor sews up a Royals victory with Singer; 6-3 KC over TB

Tonight's game felt comfortable, then like another pointless loss, and finished on a high note. The good version of Brady Singer was in attendance for tonight's game. He allowed two runs, only one of which was earned in six-plus innings.


Ballers Bake In The Sun

FORECAST: Relief from the heat begins on Sunday, rain chances increase on Monday

Temperatures will stay hot even after sunset with many areas in the 90s after sunset. A heat advisory will remain in effect until 8 p.m. on Sunday for areas south of the Missouri River. A cold front will swing through by midday and could trigger some showers and thunderstorms. A few strong storms are possible with gusty wind and large hail.