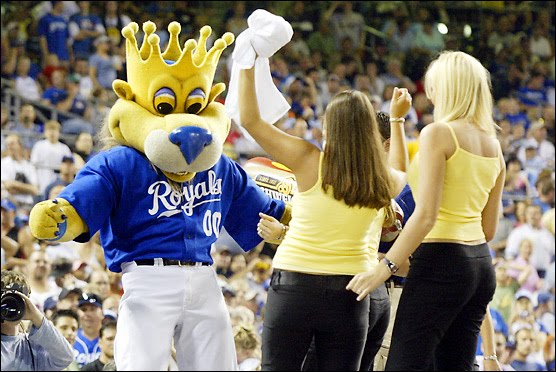 Now past the halfway point of a miserable season, even diehard fans are giving up on the home team in EPIC fashion.

Here's the most honest, and therefore best, passage of the week from any local sports writer about the game currently underway . . .

"Do yourself a favor. Let the people who are paid to do so watch this game for you and read about it later. Watch replays of position players pitching later if you feel the need. Just find a better use for your Saturday afternoon than this mess."

Read more via www.TonysKansasCity.com links as this first write-up is my fave . . .

Royals down 11-0, blogger begs you to do something else

There has been a push in recent years among companies to offer half-day Fridays during the summer as a perk for their employees. Maybe someday soon it'll be full-day Fridays. That would be cool. In the meantime, these Royals think you should take a half-day Saturday.


The Royals pitching staff walks too many batters, but at least they also can't strike anybody out

Let's start from square one. There are a lot of metrics that are important to the game of baseball, but perhaps the single most important metric is on base percentage. That's because baseball is unique among major sports: there's no timer. Rather, the game ends when its finite supply of resources-outs-are all gone.


The Royals at the halfway mark

Halfway through the 2022 season, the Royals are not where they were hoping to be. Last year's hot start in April brought some hope that perhaps the rebuild was further along than expected, and even a summer swoon was hand-waved away as being due to injuries to key hitters and part of the lumps you take integrating young pitchers to the big leagues.