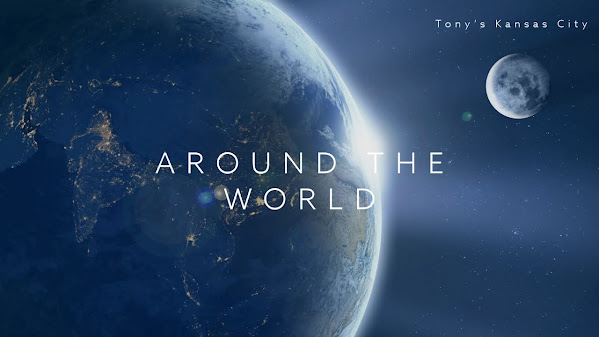 Right now we share a few more topics we've been thinking about today as we check pop culture, community news and top headlines.

With NASA releasing new images from the James Webb telescope, a lot of people wonder what exactly we are learning from these pictures and what they tell us about our universe.Experts at Science City explained that the images we are seeing are of different galaxies and stars, and in some cases, even other planets.

OVERLAND PARK, Kan. - Despite pushback from surrounding property owners, the Overland Park Planning Commission advanced a rezoning request that could bring more than 400 new apartments to the southern portion of the city. On Monday, the commission voted 9-0 to approve a request to rezone roughly 17 acres of land in the southwest corner of 135th Street and Antioch Road.


Today's Blaze Near The Loop

KANSAS CITY, Mo. - Smoke from three burning rail cars sent a plume of black smoke into the air Tuesday afternoon near downtown Kansas City, Missouri. The burning trailers were spotted by a train conductor near the train tracks in the 500 block of Atlantic Street.

KANSAS CITY, Mo. - A 7-year-old girl pulled from a pool at Oceans of Fun last week has died, according to the owners of the park. It happened as Stephanie Craig was about to leave the Coconut Cove part of the park Tuesday evening, July 5 th with her husband and two young boys.

KANSAS CITY, Mo. - The effects of Missouri's abortion trigger law following last month's Supreme Court ruling to overturn abortion protections from Roe vs Wade are still being decided. The National Association for College Admission Counseling was looking at Kansas City, Missouri, as a spot for its annual conference in 2025.


Hottie Gets Haterz Off Her Chest

Written by Toyin Owoseje, CNN Florence Pugh wants the world to know she is proud of her body -- nipples and all. The "Black Widow" actress has addressed the "aggressive" and "vulgar" criticism she received after sharing a picture on social media of the sheer gown she wore to the Valentino haute couture show in Rome.

The controversy surrounding Hunter Biden began when his infamous laptop came under scrutiny in 2020, and mainstream outlets and social media giants rushed to defend his name against alleged "Russian disinformation," but Fox Nation continues to dig deeper into the life of President Biden's son, exploring the scandals that created such a controversial figure.


MAGA Moves Away From Trump

Half of G.O.P. Voters Ready to Leave Trump Behind, Poll Finds

As Donald J. Trump weighs whether to open an unusually early White House campaign, a New York Times/Siena College poll shows that his post-presidential quest to consolidate his support within the Republican Party has instead left him weakened, with nearly half the party's primary voters seeking someone different for president in 2024 and a significant number vowing to abandon him if he wins the nomination.

Cops responding to the Uvalde, Texas, school shooting ran away from gunshots while 19 children and two teachers were left to die in their classrooms, according to new footage of the horrifying attack published Tuesday.

As the Russia-Ukraine war enters its 138th day on July 11, 2022, many people have found themselves tuning out at this point to the seemingly endless tragedy, horror and destruction in Ukraine. Yet many faith leaders and God-filled volunteers will never ignore the suffering of others.

KANSAS CITY, Mo. - The Belfonte Dairy announced a product recall Tuesday night that involves its 1.5 quart container of "Chocolate to Die For" premium ice cream. A news release from the company sent Tuesday night states, "the product may contain undisclosed peanuts, which could cause illness if consumed.

The 'Buck Moon' will be back overnight Tuesday

KC is clear and cooler tonight with lows in the low and mid-60s. Things are sunny with highs near 90 Wednesday and Thursday. Showers are possible Friday morning with more clouds. Highs will be in the low 90s Friday through the weekend.