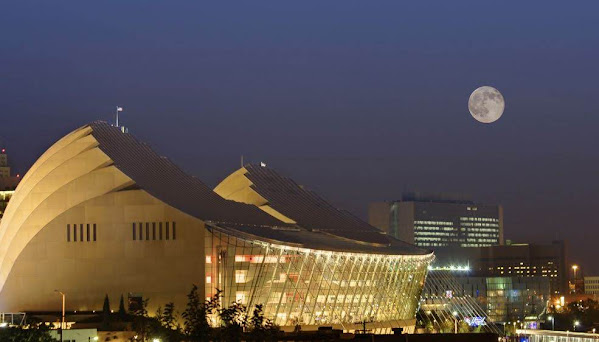 Right now we take a quick peek at links that might not matter in the morning for our night owl, insomniac and early rising denizens

Hide Transcript Show Transcript OF THE CITY'S EAST BOTTOMS WHERE PART OF A UNION PACIFIC TRAIN HAS DERAILED. IT HAPPENED NEAR NORTH MONTGOMERY ROCHESTER OUR CREW ON THE SCENE SAYS THREE OR FOUR CARS DERAILED NO WORD YET. WHAT CAUSED ALL OF THIS UNION PACIFIC WORKERS THAT THEY'RE TRYING TO GET IT CLEANED UP.

KANSAS CITY, Mo. - Skateboard enthusiasts will have the chance to weigh in on proposed improvements to Lenexa's skate park at Sar-Ko-Par Trails Park next week. The Lenexa Department of Park and Recreation says the existing skate park has been in service for more than 20 years and is starting to show its age.

KANSAS CITY, Mo. - For the second time this year, WWE is returning to Kansas City. This time, the longest-running weekly episodic program in the U.S, Monday Night Raw, is returning to the T-Mobile center for the first time in a year on Sept. 5.


Hint: They're Not Talking Sports

As you may already know, Kansas City Chiefs superstars Patrick Mahomes and Travis Kelce both participated in the American Century Championship golf tournament at Lake Tahoe over the weekend. Social media was filled with video clips from the event - where the two friends had their usual good time together.

The Kansas City Royals remained hot on Monday as they swept the Tigers in a day/night doubleheader. It's the first time they've swept a doubleheader in 2022. In Game 1, it was the Brad Keller show in a 3-1 victory. After dominating Detroit on the road in his previous meeting against the Tigers, the right-hander didn't miss a beat.

'Summer of booty!' Jennifer Lopez promises fans New footage of Jennifer Lopez shows the age-defying 52-year-old flaunting her flawless bikini body in a bright yellow bralet, while another shot showed her experimenting with a lipstick almost the same shade of yellow.

The Secret Service confirmed Monday that it is aware of reports that the contents of Hunter Biden's iCloud account were hacked over the weekend, exposing alleged texts, pictures and videos of the president's son doing drugs and engaging in other salacious activities.

A new dominant omicron strain in the U.S. is driving up cases - and reinfections

For much of the pandemic, the only silver lining to coming down with a case of COVID-19 was that you likely wouldn't catch it again for a while (though there isn't exactly a definitive answer on how long that period immunity typically lasts).

Tough times are ahead in Biden's economy. Here's your recession checklist

If you haven't been paying much attention to the small army of economists droning on about the threat of a recession, that's OK. It's summer. It's hot. Nobody, not even me, one of those economists, wants to dig through the mountain of boring economic data detailing things like consumer confidence and retail inventories.

Keeping up with Kete. Kim Kardashian gave fans an intimate glimpse into her relationship with Pete Davidson on social media on Monday. The "Kardashians" star, 41, posted a slideshow on Instagram of her and the "Saturday Night Live" alum, 28, spending a day together at the pool.


Country Show Worth A Peek

"If you see her...tell her the light's still on for her."That's because Kansas City is excited to welcome Reba McEntire back in concert this fall. McEntire announced her return to the road with a fall area tour starting in October, featuring Terri Clark, with a stop at Kansas City's T-Mobile Center on Nov.

Halestorm brought the tempest to Starlight

Not as humid for your Tuesday

Hide Transcript Show Transcript LATER ON IN TEMPERATURES WILL DROP. LOOKING AT EVENING TEMPERATURES, 87 AT 7:00. 8:00 WILL BE 85 WITH A 20% CHANCE OF RAIN. EVEN AT 11:00 WE WILL BE DOWN TO 79. IT DOESN'T LOOK LIKE MUCH OF THIS WILL HOLD TOGETHER. FIRST ALERT FUTURESCAN'S.

NASA's James Webb Space Telescope has produced the deepest and sharpest infrared image of the distant universe to date. Known as Webb's First Deep Field, this image of galaxy cluster SMACS 0723 is overflowing with detail.