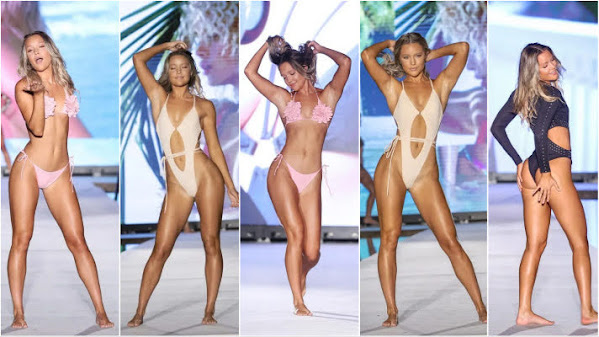 Right now a newbie bikini hottie model made a splash over the weekend at a Sport Illustrated event and that inspires this peek at pop culture, community news and top headlines.

As war continues in their homeland, Ukrainians welcomed in Kansas City

KANSAS CITY, Mo. (KCTV) - About 5,000 miles from Ukraine, in the middle of the United States, Kansas City residents and newly arrived Ukrainians gathered in the KC Bier Co. Biergarten for a picnic and social gathering.

The Show-Me State's time as a political bellwether has passed. For decades leading up to the 2000s, Missouri voters chose the winner in almost every presidential race. But over the past 20 years, the electorate has drifted to the right, growing more and more red as Republicans took control of statewide offices and seats in Washington, D.C.

Breaking down the Kansas primary field

There isn't a lot of mystery about who will be the top candidates for the Kansas governor coming out of August's primaries. Democratic Gov. Laura Kelly will almost certainly be re-nominated by her party, and state Attorney General Derek Schmidt will likely get the Republican nod.

Rob Stouffer describes his summers as a bit of a carnival. Every couple of days he and his team travel to a new location, unload the trailer, carve a design into a field and film it from aloft before packing up and driving to the next spot.

We love Florida here at Uproxx - as a travel destination, if not as a state of mind. From the pristine beaches of Fort Myers to the party scene in Miami, the Sunshine State offers a year-round tropical oasis.

When Donald Trump formally declares his 2024 candidacy, he won't just be running for another term in the White House. He'll be running away from legal troubles, possible criminal charges, and even the specter of prison time.

DUBAI, July 17 (Reuters) - Iran is technically capable of making a nuclear bomb but has not decided whether to build one, a senior adviser to Iranian Supreme Leader Ayatollah Ali Khamenei told Qatar's al Jazeera TV on Sunday. Kamal Kharrazi spoke a day after U.S.

The U.S. has failed to contain the outbreak of monkeypox and is "at the cusp" of seeing the virus become endemic, former FDA commissioner Scott Gottlieb told CBS' "Face the Nation" on Sunday. Driving the news: According to CDC data, there are currently more than 1,800 monkeypox cases in the U.S.

Sami Sheen is unbothered by her mom, Denise Richards, creating an OnlyFans account right after she joined the platform. "I don't mind at all, like, I'm happy for her," the 18-year-old told TMZ Thursday, adding that the "Wild Things" star, 51, is "doing really well" on the subscription-based service.

KANSAS CITY, Mo. - Adolph and Lucy Velasquez sealed their love July 17, 1942. "I just feel like from day to day, I just kind of fell in love with her," Adolph said. Surrounded by their children, grandchildren and great-grandchildren, the couple shared memories and kisses they've given one another for 80 years at their celebration Sunday.

KANSAS CITY, Mo. (KCTV) --- A Storm Track 5 Weather Alert is posted Monday due to poor air quality. An Air Quality Alert has been posted via AirQKC all day Monday with higher levels of ozone expected. Dangerous heat is expected by Tuesday with highs near 100°.

Maggie Rogers - Horses is the song of the day and this is the OPEN THREAD for right now.