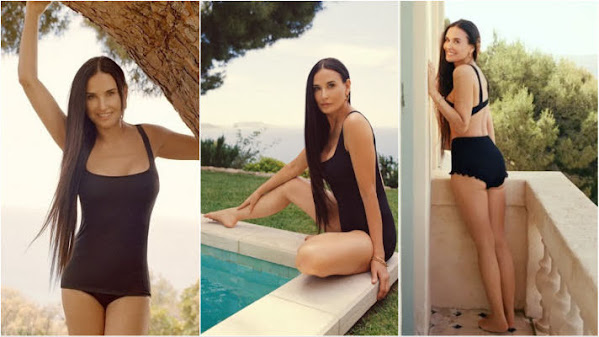 Right now the legacy of Demi endures in our hearts as we check pop culture, community news and top headlines.

KANSAS CITY, Mo. - Inflation is having an impact on many Americans, including people in rural areas. Inflation increased to its highest levels in over 40 years at 9.1% for June according to new information released from Bureau of Labor Statistics. According to a report from Iowa State University, "rural households are more vulnerable to inflation."

MERRIAM, Kan. - The City of Merriam has approved the redevelopment of a former Kmart building. The former Kmart site, located at 8703 Shawnee Mission Parkway, just east of Interstate 35, has sat vacant since the store closed in 2013. Plans for the $136 million mixed-use project include four restaurants, two apartment complexes, retail space and a parking garage.

GRANDVIEW, Mo. (KCTV) - Authorities are trying to figure out what caused an early Thursday morning fire that severely damaged a Grandview church. Crews responded at 12:33 a.m. to Impact Church, on the southeast side of Main Street and U.S. 71 Highway in Grandview. When firefighters arrived, the church was engulfed in flames.

In the three years Vlatko Andonovski has coached the U.S. women's national soccer team, he could've moved to any number of places - namely, to Chicago, where the U.S. Soccer Federation is based. But Andonovski insists on keeping his home base in Kansas City, Missouri, where he coached the city's first professional women's soccer team for five years.

KANSAS CITY, Mo. - Fans of the hit Netflix show "Stranger Things" will have something else to obsess over while waiting as the cast films Season 5. Netflix commissioned a massive crop circle that's located somewhere in an Indiana cornfield. The art features Eddie Munson, played by Joseph Quinn.

Demi Moore looks absolutely stunning in the campaign images for her new swimwear line in collaboration with Andie. The vintage-inspired line aims to change the idea that women "become less desirable with age." While empowering wearers' sexy sides, the suits are also comfortable and adjustable to individual styles and needs.

Biden, on Middle East tour, is battered by inflation and low approval ratings at home

Another searing inflation report yesterday underscored the deep challenges facing Democrats ahead of this year's critical midterm elections, with widespread pessimism about the state of the US economy and Joe Biden's stewardship of it. Inflation soared 9.1% in June compared with the previous year, a new 40-year high.

As Faith Flags in U.S. Government, Many Voters Want to Upend the System

N.Y. Times/Siena College Poll Desire for structural changes cuts across both parties, a Times/Siena College poll found, but for starkly different reasons. Even Democrats now question if the government is a force for good. He went so far that he threatened American democracy. He was just exercising his right to contest the election.

Nick Cannon Says He'd Get Back with Mariah Carey

Play video content The Hot Tee Podcast No matter how many kids he helps create, Nick Cannon is making it clear ... Mariah Carey is his one and true love. Nick was a guest on "The Hot Tee Talk Show" where he dove headfirst into the topic "Spin The Block" ...

New Feature at Leopold Gallery-Open to All!

How many times have you walked past Leopold Gallery...but didn't stop in? Perhaps you thought "well I can't afford anything here" or "I don't know anything about art". That's what stopped me from browsing the gallery...until Paul Dorrell, President, invited me for a visit. "I've got a new feature to show you-come on by!".

Speaking on NFL Network's "Good Morning Football" on Wednesday, new Kansas City Chiefs safety Justin Reid pulled no punches: despite trading wide receiver Tyreek Hill to the Miami Dolphins this offseason, the Kansas City offense will continue to be dominant. "The Chiefs offense is going to do what we always do," declared Reid, via NFL.com.

Sunny and hot in the metro Thursday

Hide Transcript Show Transcript TEMPERATURES THE WHERE THEY ARE. SOME PEOPLE, THEY SEND IT OUT WHAT. WE HAVE A CLUSTER OF DOWNPOURS, A FEW THUNDERSTORMS SOUTHEASTERN NEBRASKA. MOVING TOWARD A HIAWATHA. THEY MIGHT MAKE IT DOWN TO HIAWATHA, MAY BE ATCHISON OR ST. JOSEPH THEY ARE STARTING TO FALL APART.

The KLF - Justified & Ancient is the #TBT song of the day and this is the OPEN THREAD for right now.