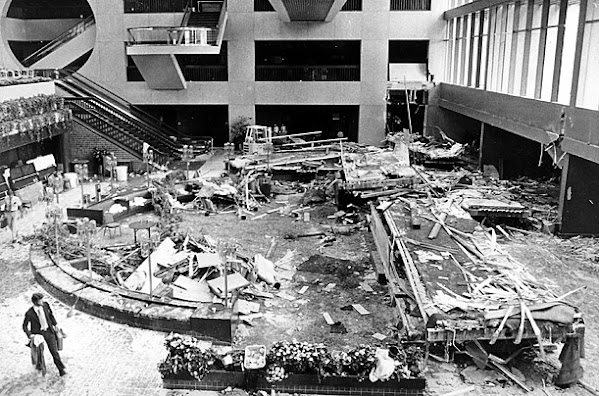 The anniversary of Kansas City hotel tragedy barely merited a footnote yesterday even if it proved to the be defining moment for this cowtown in the eyes of many locals.

Our take on local architectural history . . . Kansas City has a propensity for building junk.

Thankfully . . . Disaster has mostly been averted in the modern era as cheap but reliable glass & steel construction has taken hold across the U.S. whilst this tragic milestone fades from popular memory:

The catastrophe on July 17, 1981, is one of the deadliest structural collapses in US history. That same year, the Champlain Towers South condo building in Surfside, Florida, was completed -- only to meet a similar, disastrous fate this June, when it partially collapsed killing at least 97 people.

Forty years after the Kansas City disaster, the memories are still vivid. And the lessons learned from it are as relevant as ever -- not just for engineers and architects but for everyone, several people close to the tragedy told CNN.

What was learned from the Hyatt Regency collapse in Kansas City

On a balmy Missouri evening in 1981, this was one of the hottest places to be. More than 1,500 revelers had gathered on the first floor of the Kansas City Hyatt Regency for a popular tea dance party hosted by the swanky 1-year-old hotel.