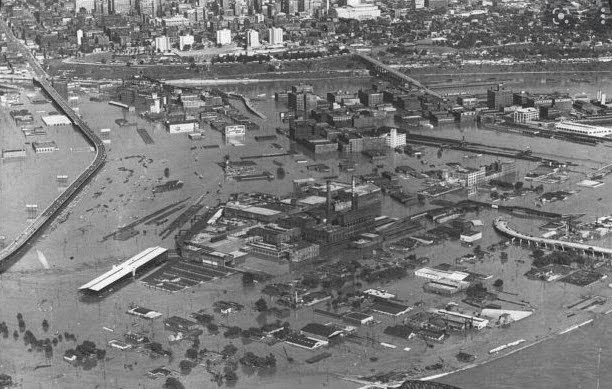 Apropos for #TBT . . . Anybody familiar with Kansas City politics understand that politicos & developers have been attempting to "revive" the West Bottoms since the 70s and nothing has really seemed to work.

This time around . . . Minor train track readjustment and the worsening housing shortage seems to provide a bit more hope in requesting taxpayer cash.

Here's part of the scheme that still seems oddly familiar . . .

In recent weeks, the zoning change required for the sweeping redevelopment concept by the New York developer has received unanimous approval from the City Council and City Plan Commission.

When fully built out over 10 years, it could add 1,200 residences, 200,000 square feet of office space, 150,000 square feet of shops, a 50-room hotel, and new public venues to a roughly six-block area north of 12th Street between Hickory on the west and Santa Fe on the east.

“These areas have been largely underinvested in for quite some time, most of the lifetime for all of us, regardless of age,” Kansas City Mayor Quinton Lucas said recently after the council approved SomeraRoad’s rezoning request.

“I appreciate a project that has good mixed-use, historic preservation and area preservation. In many ways, it’s development at its best.”

SomeraRoad's ambitious proposal to transform a sleepy section of the West Bottoms into a "dynamic" mixed-use district has strong support from City Hall and awakened worries of some longtime denizens. In recent weeks, the zoning change required for the sweeping redevelopment concept by the New York developer has received unanimous approval from the City Council and City Plan Commission.