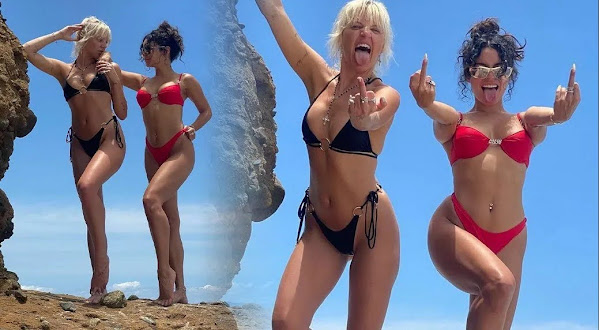 Right now we share a few of newsworthy hottie good life along with pop culture, community news and top headlines.

KANSAS CITY, Mo - Homeowners and multiple political campaigns for the August primaries are seeing their yard signs being stolen from properties across Missouri and Kansas. Jason Withington, running for the Clay County Commission, says somebody was caught on his neighbor's door ring camera stealing multiple signs in his neighborhood.

Besides being a Harvard professor, Arthur Brooks is also the host of the podcast "How to Build a Happy Life with Arthur Brooks." Brooks holds a doctorate in policy analysis and believes happiness must be included in public policy.

A Saint Luke's patient in Overland Park received a surprise visit Thursday from two Kansas City Current players who heard about his story and wanted to encourage him with his recovery."I wear these boots every day," said Doug Beats. "I figured I'd do it in my therapy."He said the boots are a motivator.

KANSAS CITY, Mo. - AdventHealth announced Thursday construction on the AdventHealth Cancer Center Shawnee Mission is set to begin Monday, July 18. Focused exclusively on cancer care, the 71,000-square-foot center promises to "accommodate the anticipated need for more than twice as many patients to be served by 2030," according to AdventHealth.

Kansas City Public Schools is entering the new school year without the leadership of its longtime superintendent, Mark Bedell. But it hopes to maintain the momentum he generated. "I know exactly what we need to do to move forward, because I had the privilege to work alongside him in most of what we've done," said Dr. Jennifer Collier, who will serve as the district's interim superintendent for the next school year.

Vanessa Hudgens was unmissable in a sizzling hot pink swimsuit as she helped celebrate her good friend Sarah Hyland's bachelorette party on Wednesday. The 33-year-old Spring Breakers star joined the 31-year-old Modern Family fixture and plenty of friends at an exclusive resort in Punta Mita, Mexico.

President Joe Biden on Friday will travel to the West Bank and meet with President Mahmoud Abbas of the Palestinian Authority before heading to Saudi Arabia for the final leg of his closely watched Middle East trip.


MAGA Back In The Beltway

Trump to return to D.C. this month for the first time since leaving office

Donald Trump is returning to Washington later this month for the first time since the end of his presidency, Axios has learned. Why it matters: Trump's plannedJuly 26 visit - to headline an event for the America First Policy Institute - comes as the Jan.

Why Democrats are begging Trump to start 2024 right now

"It puts in perspective what's at stake, shows that the Republican Party is still extreme and helps set up the contrast," said Cedric Richmond, a former White House senior adviser now at the Democratic National Committee.

FOUNTAIN, Colo. - The local Army recruiting station was empty. The normally reliable recruiting grounds at the nearby Walmart were a bust. With the Army still thousands of soldiers short of its recruiting goal, the station commander, Sgt. First Class James Pulliam, dressed head to toe in camouflage, scanned a strip-mall parking lot for targets.

Wholesale prices shoot up near-record 11.3% in June on surge in energy costs

Inflation hit hard at the wholesale level in June, as producer prices surged a near-record amount from a year ago due to a big jump in energy costs, the Bureau of Labor Statistics reported Thursday. The producer price index, a measure of the prices received for final demand products, increased 11.3% from a year ago, the highest reading since the record 11.6% in March.

Why I Shouted Down the President at the White House

The last time I saw my son was the morning of Valentine's Day 2018. Joaquin looked fabulous as usual, holding a bouquet to give later that day to his girlfriend, Victoria. I took him to school, and we chatted along the way.

'We Will Kill Them Again': As Russia Advances, Ukrainians Dig In

KYIV-Leaning back from the picnic table, Den drowns his cigarette in a murky cup of water cut from the bottom of a plastic bottle and grimaces as I press him on what he and his fellow volunteers did with suspected Russian soldiers they captured during the opening days of the war.

BEIJING - China's economy contracted in the three months ending in June compared with the previous quarter after Shanghai and other cities shut down to fight coronavirus outbreaks, but the government said a "stable recovery" is under way after businesses reopened.

The man who called Representative Alexandria Ocasio-Cortez a "big booty Latina" earlier this week has defended his heckling of the New York Democrat in an interview with Republican Representative Marjorie Taylor Greene of Georgia. In a video that has since gone viral, Ocasio-Cortez was confronted by social media personality and self-described "professional troll" Alex Stein on the U.S.

BARE-KNUCKLE star Paige VanZant shocked her loyal followers to the core with a brand new lung-busting gym video. The former UFC star, 28, is preparing to headline BKFC 27 in London on August 20. Paige will take on Charisa "Sweetheart" Sigala as she looks to hit back from two shock defeats.

It can be easy to lose a dream after you think you have moved on, but Greg Sheffer decided that he didn't have to leave his passions behind as an adult. Sheffer started his career in video production but had hoped he would eventually make a feature-length film.

Strange and Beautiful: The Artistic Fruits of Spanish Colonialism in the Americas - KC STUDIO

Installation view of "Paintings from South America: The Thoma Collection (1600-1800)" at The Nelson-Atkins Museum of Art through Sept. 4 (The Nelson-Atkins Museum of Art) We don't know their names or identities and probably never will. Art historians must resort to the unsatisfying designation of "Unidentified artist" when studying the strange artistic fruits of Spanish colonialism in the Americas.


Mission Of Hope In Suburbs

A Grandview church is facing a long and costly road to rebuilding after it was destroyed by fire overnight. It happened at a building housing several tenants including Impact Church, off 71 Highway and High Grove Road. KMBC 9 spoke with the pastor who founded the church about how he hopes to move forward with the community's help.

KANSAS CITY, Mo. - According to a new study, in their respective leagues, Kansas City Chiefs and Sporting Kansas City fans are among the happiest fan bases. The study, done by the Online Betting Guide, looks Instagram and Twitter likes and followers, a love-to-angry ratio and gives a fan happiness score.

Morning rain clears out for hot and humid afternoon

Nilüfer Yanya - the dealer is the song of the day and this is the OPEN THREAD for right now.