"So now everybody is good with kneeling at football games?!?" 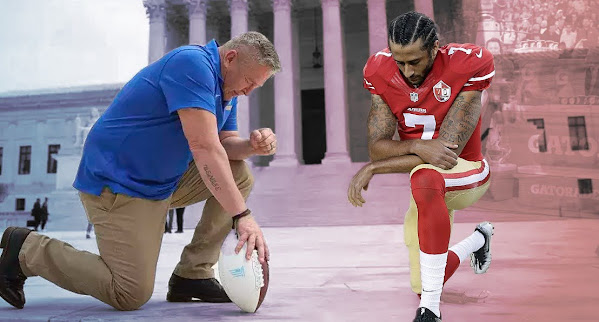 Meanwhile . . . Kansas City's most prolific writer on faith & morals offers his perspective on a recent school prayer decision from the highest court in the land.

"When a coach kneels on the 50-yard line after a football game to pray, there's immediate pressure on players to join him, whether they are people of faith or not. You simply don't want to get on the wrong side of your coach. And when, beyond praying, the coach starts giving faith-based post-game pep talks, you listen. The coach's actions were coercive and manipulative. But this court, which now seems to have become something like a wing of the Republican Party (whatever that is anymore), decided there was nothing wrong with that."

It's been my experience that a lot of Americans misunderstand the concept of having a separation between church and state. Which is to say that many people think it means that religion should have no voice in offering ideas for...