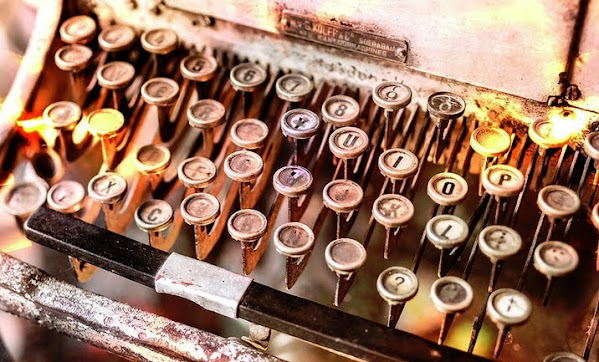 This is one of the best local stories we've read so far this summer.

Check this informative passage and local journalism that offers a life-affirming view of this cowtown . . .

The first commercially successful typewriter was patented in 1868 by inventor Christopher Latham Sholes, who designed the QWERTY keyboard that, with a few adaptations, is still in use. The name comes from the first six letters in the top-left corner of the keyboard.

But the first typewriters were awkward. Mark Twain, Missouri’s most cantankerous storyteller, bought his first typewriter in 1873. He reportedly liked the machine at first, but developed a fraught relationship with his "newfangled typing machine."

"That early machine was full of caprices, full of defects--devilish ones,” Twain wrote in 1904. “It had as many immoralities as the machine of today has virtues. After a year or two I found that it was degrading my character."

In a world of digital distractions, these Kansas City wordsmiths embrace analog typewriters

Among the old furniture and knickknacks that crowd the aisles of Reclaimed by Michele, a vintage shop in North Lawrence, Kansas, Alison Dishinger is on the hunt. As she carefully picks her way through the antique wardrobes, desks, and stacks of plates that cover nearly every surface, she's keeping an eye out for something in particular.