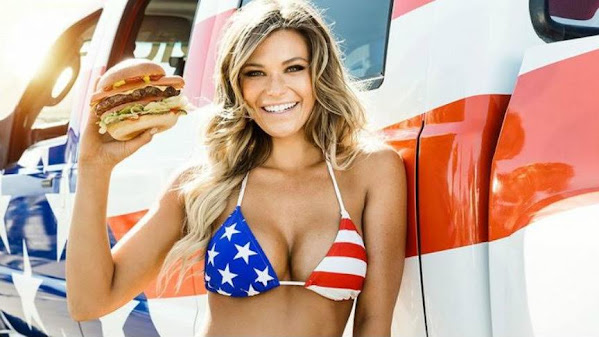 This lead image is a screenshot from an advert that might be the most American thing we've ever witnessed even if its not to the liking of everyone . . .

And so . . . We dutifully check pop culture, community news and top headlines today.

KANSAS CITY, Mo. - The Kansas City Health Department is taking a new approach in hopes of helping the community get, and stay, as healthy as possible. The department said more than 50 people have signed up to share public health information with their neighbors and other people they meet though out the day.

Limeview Development has proposed a residential development at 12800 Holmes Rd. (near Blue Ridge Blvd) consisting of 19 single family homes on 5.6 acres of undeveloped wooded property. The preliminary plan and a request for rezoning will be reviewed by the City Planning Commission in a public hearing on Tuesday, July 5th.

Just like a firework, grocery prices are sky high this Fourth of July holiday

OPINION AND COMMENTARY As we gather this Fourth of July with friends and family, we might celebrate with fireworks, parades and burgers - myself included - but what we're really celebrating are our American values. This is a nation of innovators, of doers and makers, and it has been since the first Independence Day.

After 2 years of subdued festivities, KC-area happy to celebrate July 4th with a bang

KANSAS CITY, Mo. - A long holiday weekend means people are having big celebrations. The city of Liberty has had fireworks show every year for the past 30 years, and what better place to celebrate America's independence than in a city called Liberty? The event included food, music, games and, of course, fireworks.

Multiple people are feared dead after a reported shooting at a 4th of July parade in Highland Park, Illinois, on Monday. Witnesses say crowds fled the sound of gunfire, and others saw at least five bloodied people lying on the ground and another under a blanket, according to the Chicago Sun Times.

President Joe Biden on Monday afternoon shared his "shock" and support after a deadly mass shooting at a July 4 parade in a Chicago suburb earlier that day -- the latest in an ever-longer string of mass shootings in America.

​Former President Donald Trump lashed out at Rep. Liz Cheney (R-Wyo.) on Monday, calling her a "despicable human being" a day after the congresswoman said in an interview that the Jan. 6 committee may refer the 45th president to the Justice Department for potential prosecution over his role in the Capitol riot.

Good morning. In the months after the 2020 US presidential election, rightwing TV news in America was a wild west, an apparently lawless free-for-all where conspiracy theories about voting machines, ballot-stuffed suitcases and dead Venezuelan leaders were repeated to viewers around the clock. There seemed to be little consequence for peddling the most outrageous ideas on primetime.

Basketball star Brittney Griner has sent a desperate letter to the White House, pleading with President Joe Biden to do everything in his power to bring her home from Russia, where's she's been in custody for more than four months after being arrested for allegedly possessing cannabis oil.

An examination of the bullet that killed Al Jazeera correspondent and Palestinian-American citizen Shireen Abu Akleh "could not reach a definitive conclusion" regarding its origin, due to the condition of the bullet, but the US Security Coordinator has "concluded that gunfire from [Israel Defense Forces] positions was likely responsible" for her death, State Department spokesperson Ned Price said in a statement Monday.

The secretary of homeland security, Alejandro Mayorkas, repeated warnings against attempting to illegally cross the US-Mexico border on Sunday after 53 died inside a trailer in San Antonio, Texas, last week in the deadliest ever migrant smuggling episode at the border. "These migrants received false information from smugglers," Mayorkas told CBS's Face the Nation.

Today - on Monday, July 4 - our nation celebrates its 246th Independence Day. In honor of the federal holiday, Fox News Digital is highlighting joyful moments captured on film over the years. Some date as far back as 1919! 4TH OF JULY: WHAT IS IT AND WHY DO WE CELEBRATE THE HOLIDAY WITH FIREWORKS?

Tom Cruise turned 60 years old on July 3 and all we got him was a blockbuster movie.

Renee Gracie, an Australian motorsport driver turned OnlyFans model, recently quashed a popular misconception that OnlyFan stars are dumb. She said, "The biggest one I think of straight away is most people, mainly men, think because we show our body and do things online that are dumb.

The most popular July 4th food in Kansas, Missouri

KANSAS CITY, Mo. - Cookouts on the Fourth of July are almost as common as fireworks. Whether it's a community potluck or a family gathering, you can bet there are certain dishes that will always show up on the table. But, those favorites depend on where you live.

July's weather will be critical for Midwest corn farmers and, possibly, consumers

Mark Mueller sleeps anxiously this time of year. Except when it rains. The northeast Iowa farmer said the corn on his farm near Waverly is slightly shorter than normal for this time of year, but he expects that to change very soon.

The most underrated player on all 32 NFL teams: Why Tua Tagovailoa, Christian Kirk, Jimmy Garoppolo make the list | ESPN Nick Bolton, LB If the Chiefs defense hadn't been such a disaster in the first half of the 2021 season, Bolton might have been a popular candidate for the Defensive Rookie of the Year award.

RAYTOWN, Mo. - If a thief steals you car, this is the Kansas City-area officer you want on the case. Raytown Police Officer Tommy Speakman is known for tracking down stolen cars in his community, according to the department. It's apparently something that simply "speaks" to him.

Heat takes over this week in Kansas City

Hide Transcript Show Transcript IS GOING TO CREEP IN BY TOMORROW. RIGHT NOW, WE ARE EXPECTING 95 FOR THE OFFICIAL HEIGHT. HEAT INDEX ANYWHERE FROM 102-104 AND WINDY CONDITIONS. LATER, PAST SUNSET, WE DROP DOWN TO 87 FOR THE AVERAGE TEMPERATURE HEAT INDEX WILL FEEL AROUND MID 90'S.

America the Beautiful sung by Ray Charles is the song of the day and this is the OPEN THREAD for right now.