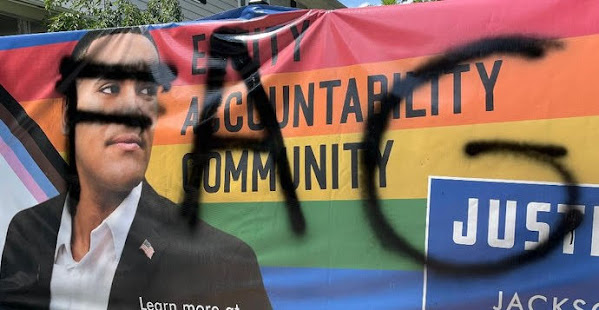 Here's his press release on the incident . . . 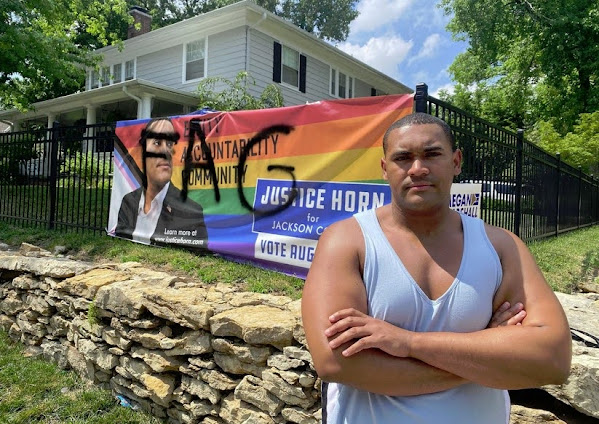 KANSAS CITY, Mo. (July 3rd, 2022) – Justice Horn, candidate for Jackson County Legislature sign defaced on July 3rd in Midtown Kansas City, Missouri. Justice Horn is the first openly gay person of color to seek this county seat and if elected, would be the first openly gay county offical in the state of Missouri. Justice is no stranger to hostility as he’s received open threats during the Black Lives Matter movement in 2020, which also includes the defacing of a Black Lives Matter mural last year here in Kansas City at our Briarcliff location in the Northland.

Justice Horn: “This one hurt and I’m not going to pretend like it didn’t. I grew up facing these same slurs as a bullied kid and thankfully moved past that pain, but these words still hurt even as an adult running for office. I’m not immune to this kind of hurt and pain, but I am going to try and be. I felt the need to talk about this because I want people to know that we as queer people still face homophobia and hate, even in what’s considerd a liberal city. We can’t let our lack of knowing the realities that exist today make things like this okay and normal - because they aren’t. We can change this by standing up and challenging this. As a openly gay person of color running to represent this community, this has proved all the more reason that I should be running and that I should be in this race. I’m going to keep my head high and prove whoever did this wrong. I hope the community that I love will stand with me on this one because we can’t let hate win here in Kansas City.

Crissy Dastrup (Close friend of Justice Horn and was with him): "Answering a call from my 14 year old queer daughter that Justice's banner had been defaced was a jolt to my system.  The two of them are close. So for her to see him be degraded so openly was heartbreaking.  Not only did she watch her hero take a blow by a homophobic coward (on her grandmother's fence no less), she was also forced to consider the hostility and hate in this world toward the queer community."

Justice Horn will hold a press conference at the site of the defaced banner on Tuesday, July 5th at 9 AM CST at 4644 Campbell St. Kansas City, MO 64110

Location: Site of the banner