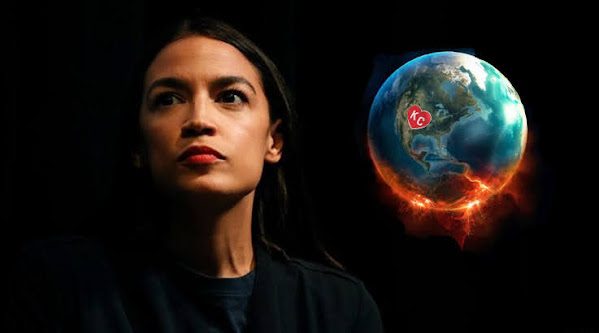 Across the globe there's outcry and fear over rising temperatures and the suspected impact of an evolving climate impacted by carbon emissions.

To be fair, climate change is hotly debated and despite the politically charged effort to "trust the science" and switch to "sustainable" energy sources . . . Skepticism continues to take hold and there have been little legislative gains to switch to "green" energy given that windmills make easy targets for right-wing jokes.

Nevertheless and with a reminder that AOC gives us less than 12 years to discuss this issue before the sky falls . . . The debate over the fate of the planet persists via social media memes and divisive political chatter.

"A Kansas City, Missouri, Health Department said that one death in June and five others so far in July are under review for possibility being heat-related."

Again . . . None of the deaths have been confirmed as "heat related" it's very possible the COVID killed them too.

Read more via www.TonysKansasCity.com links from "many sides" of the debate . . .

Heat possible cause in deaths of 6 Kansas Citians since June

KANSAS CITY, Mo. - As high temperatures continue their dominance of this summer, authorities are reviewing whether heat was the cause of several deaths since June. A Kansas City, Missouri, Health Department spokesperson told KSHB 41 News Thursday that one death in June and five others so far in July are under review for possibility being heat-related.

Do these heatwaves mean climate change is worse than we thought?

Skip to Content General warming predictions are still on track, but recent heatwaves are a stress test for the modeling of extreme events. Millions of people are now experiencing the effects of climate change firsthand. Blistering heat waves have smashed temperature records around the globe this summer, scorching crops, knocking out power, fueling wildfires, buckling roads and runways, and killing hundreds in Europe alone.

Bloomberg opinion published a piece Wednesday calling for President Biden to increase gas prices, intentionally and forever, in order to hasten a transition to alternate forms of energy. The op-ed, written by columnist Eduardo Porter, called for a "$5-a-gallon floor on gasoline prices."


The climate crisis is driving heat waves and wildfires. Here's how

Brutal heat waves are gripping Europe and the US, and are forecast to dump searing temperatures on China for weeks. The heat, and the wildfires that come with it, is part of a global pattern of rising temperatures attributed to human activity.


The Dust Bowl heat was bad. But this summer's record temps were even grimmer.


Record rainfall and scorching heat wave cause havoc in China

Since the start of summer, scenes of devastation and misery have emerged from across China, as the world's most populous nation grapples with an unrelenting torrent of extreme weather emergencies.


Is 'wokeness' responsible for US and European heat waves? Absolutely.

With record temperatures steam-pressing the United States and much of Europe, Africa and Asia, many in my Science-Is-A-Hoax Facebook group have posed a sensible question: Is " wokeness" to blame for these heat waves? As a white man with access to the internet and an unwillingness to care about anyone besides myself, I can tell you the answer is, indisputably, yes.

Extreme heat has besieged nearly the entire Northern Hemisphere this year. Currently, Europe is simmering in its third heat wave of the summer, fueling devastating wildfires and threatening millions of people. On Sunday alone, Portugal and Spain reported more than 1,000 heat-related deaths. In France, thousands of people fled wildfires.