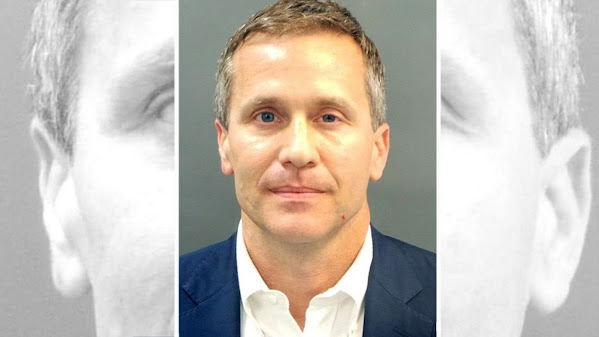 I watch too much political coverage via Internets because the algorithm is sending me NOTHING but ads about the rough personal life and allegations against Eric Greitens.

The latest one just released yesterday might the roughest yet and it starts with a shocking allegation that's probably just a metaphor intended to be taken out of context . . .

What readers should know . . . It's not Sheena Greitens running this attack advert. Instead a political action committee is using the testimony from her affidavit to malign the MAGA contender.

Now . . . In fairness, since we're talking about political adverts . . . We feel obliged to share the latest from Greitens . . . He starts out with a loving shot of old school Prez Ronnie and then sings the praises of former Prez Trump.

We listened closely and noticed a bit of Americana . . .

"Hard Times Come Again No More" (sometimes, "Hard Times") is an American parlor song written by Stephen Foster. It was published in New York by Firth, Pond & Co. in 1854 as Foster's Melodies No. 28. Well-known and popular in its day, both in America and Europe, the song asks the fortunate to consider the plight of the less fortunate . . ."

I don't like to talk too much about myself on this blog BUT like many people I'm into "mood music" and this American classic has spoken to people throughout the ages . . . It's also a running joke with me because it's sooooo depressing that it puts me in a good mood . . .

Lose a job, tooth, sweetheart . . . Play this song and then giggle because it takes the listener so deep into their feelings.

Singers and songwriters have covered the tune for more than a hundred years because it's so powerful.

Because this blog isn't really a safe space and we just recently rigged/softened the comments so you guys will STOP making AIDS/cancer/hate crime jokes whilst doxing your political rivals . . .

I've found the very WORST rendition of this tune to share with you d-bags . . .

God bless Brett Dennen  . . . He's a talented musician and he really is one of the very best young-ish folk singers out there . . . But this song is my fave for all the wrong reasons.

Take a listen and we'll finish the post on this note so that we can take a pause and then get on with our miserable lives and minding our own biz . . .