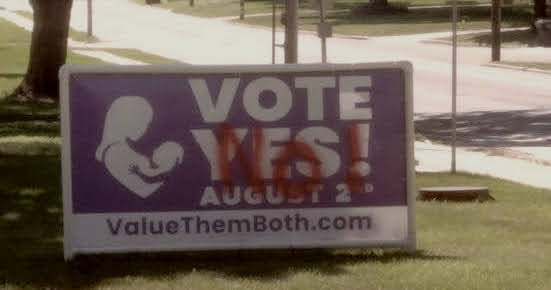 The final days of a tense campaign have started and mostly progressive national media seem focused on winning hearts and minds whilst portraying advocates against abortion as overzealous rubes who want to enslave women . . . Meanwhile sign stealing by the 'vote No' side is rampant . . . And even the most diehard Republican who value life and babies don't want to talk about caring for them outside of the womb with something practical like more funding to renew the federal child tax credit.

Here's the overview whilst activists catch their breath betwixt rounds of yelling at their family demonized opposition:

Kansans are heading to the polls Aug. 2 to decide whether the state’s constitution protects the right to abortion — the first such constitutional amendment to be determined since the Supreme Court’s historic overturning of Roe v. Wade, ending federal protection, on June 24. More than a dozen Republican states have already moved by other means to ban or further restrict abortion in the wake of the decision that reversed Roe.

The ballot measure, if approved, would effectively overturn a 2019 decision by the state’s Supreme Court enshrining abortion rights in its constitution. The measure could pave the way for the legislature to pass a ban on abortion at a time when Kansas has become a destination for pregnant patients fleeing strict abortion measures in nearby states.

FAQ: Getting the facts right on the Kansas abortion vote

On Aug. 2, Kansas voters will decide whether or not to strip out abortion protections from the state constitution - the first vote on the issue nationally since the U.S. Supreme Court overturned Roe v. Wade last month. The Value Them Both amendment would change the state constitution so it does not contain a right to abortion.


'The stakes could not be higher': Kansas abortion vote set for Aug. 2

OVERLAND PARK, Kan. - At a recent gathering of abortion rights canvassers in a strip-mall office in this Kansas City suburb, a hand-lettered sign on the wall summed up the confusion over the state's looming ballot question in two lines - a "no" vote equals support of abortion rights, "yes" means against abortion rights.

evere new restrictions upend reproductive care across whole regions of the US. Patients report delays for procedures that were once common and routine, as doctors fear vague new laws with criminal penalties. A 10-year-old rape victim was forced to travel out of state to terminate a pregnancy.


Who's getting abortions in Kansas? Plus more FAQs ahead of the Aug. 2 vote

On Tuesday, Aug. 2, voters statewide will decide on an issue that could permanently change Kansans' health care rights. Who's getting abortions in Kansas? Here are some stats, plus answers to some FAQs about the amendment vote and what it means.


'Everybody Is Dug In': Kansans Fiercely Debate the First Post-Roe Vote on Abortion

The Aug. 2 ballot question will decide whether the State Constitution will allow legislators to ban or further restrict the procedure. OVERLAND PARK, Kan. - Kansas voters will decide next week whether to remove protections of abortion rights from their State Constitution, providing the first electoral test of Americans' attitudes on the issue since the Supreme Court overturned Roe v.