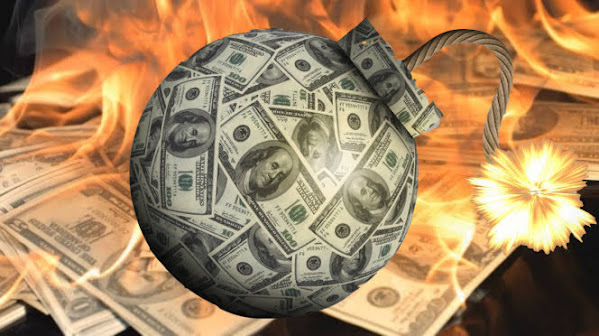 So-called postcapitalism ain't pretty as some of our smartest readers share an EXCELLENT Saturday read on the topic.

First, and foremost . . . This is economic theory but, in practice, it's ALL THEORY that powers the paper in your wallet.

If it wasn't for theory, we'd all still be trading sea shells for bananas.

"Michael Hudson is an American economist, Professor of Economics at the University of Missouri–Kansas City and a researcher at the Levy Economics Institute at Bard College, former Wall Street analyst, political consultant, commentator and journalist."

And, thanks to KICK-ASS TKC READERS, here's his stunning analysis of macroeconomics and politics that might be why our betters are going to nuke the planet . . .

Hudson begins with an analysis of the “take the money and run” ethos, complete with de-industrialization, as 90 percent of US corporate revenue is “used to share buybacks and dividend payouts to support company stock prices.”

That represents the apex of “Finance Capitalism’s” political strategy: to “capture the public sector and shift monetary and banking power” to Wall Street, the City of London and other western financial centers.

The whole Global South will easily recognize the imperial modus operandi: “The strategy of US military and financial imperialism is to install client oligarchies and dictatorships, and arm-twist allies to join the fight against designated adversaries by subsidizing not only the empire’s costs of war-making (“defense”) but even the imperial nation’s domestic spending programs.” This is the antithesis of the multipolar world advocated by Russia and China.

In short, our current Cold War 2.0 “is basically being waged by US-centered finance capitalism backing rentier oligarchies against nations seeking to build up more widespread self-reliance and domestic prosperity.”

Hudson presciently reminds us of Aristotle, who would say that it is in the interest of financiers to wield their power against society at large: “The financial class historically has been the major beneficiary of empires by acting as collection agents.”

Will the Global South break free from dollarized debt?

In his latest book, economist Michael Hudson pits socialism against finance capitalism and tears apart the 'dream civilization' imposed by the 1 perce