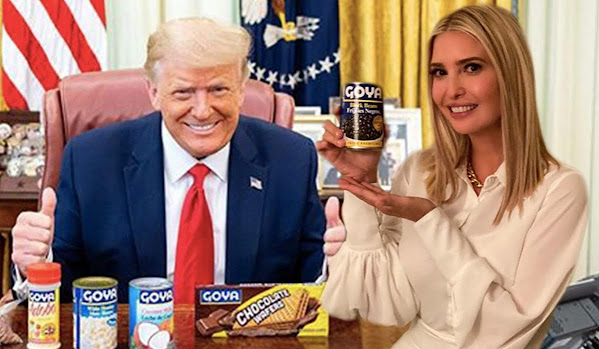 IDENTITY POLITICS IS AN OUTRIGHT LIE THAT ONLY BENEFITS THE VERY WORST ADVERTISERS & POLITICOS!!!

Because we believe in the power of the individual human spirit that people are jerks who love to endlessly argue over everything . . .

NO GROUP IS A MONOLITH!!!

Don't worry . . . Neither conservatives nor progressives REALLY understand this truism. That's part of the reason why so many lesser opportunists urge everyone to rally around personalities rather than seek alliances over ISSUES & POLICY.

Polling is a powerful tool and helps gauge voter sentiment . . . But it explains very little about what motivates any given person.

Those who don't know much about Latinos/Hispanics/Your Mexican Neighbor might think that support for former Prez Trump amongst Latinos is some cultural indicator evoking "machismo" or the old world patriarchy.

But there's also a school of thought which understands that may Latinos can trace their heritage back to countries where the governments are hopelessly corrupt and politicos are clownish and NEVER to be trusted . . . It's almost an act of defiance to pick the biggest huckster of the bunch gust OR not to give much regard to "sacred" American democracy altogether.

All of THAT is why Latino voter turnout has always disappointment politics from both parties.

Still . . . We like KK's take on this topic and it's a great place for curious people to start their research:

"Polling has shown Hispanic American voters are turning to the GOP but now we have an actual result to prove it.  The 34th District of Texas had an open seat in Congress to fill and while that district was won by Biden by 13 points, a conservative woman just won easily stealing a seat from the Dems.  This is a huge shift."

Polling has shown Hispanic American voters are turning to the GOP but now we have an actual result to prove it. The 34th District of Texas had an open seat in Congress to fill and while that district was won by Biden by 13 points, a conservative woman ...

Why The GOP Might Not Turn Off Conservative Latino Voters

"Are you a racist?" "Do you hate Mexicans?" These are the two questions J.D. Vance, the GOP's nominee for Senate in Ohio, posed to voters in a primary election ad in which he accused the media of vilifying Republicans like him for wanting a border wall - and falsely claimed that President Biden had established an "open border" that was "killing Ohioans" because "more illegal drugs and more Democrat voters [were] pouring into this country."


Biden's moves on Cuba, Venezuela could hurt Dems with Hispanics

The Biden administration this week eased some restrictive policies toward Cuba and Venezuela in a bid to increase relations with the isolated nations, a move that has drawn bipartisan pushback and may further imperil Democrats' chances to win over some Hispanic voters in Florida and elsewhere.

A group of Latinos, including several prominent Democrats, have signed an agreement to buy 18 radio stations in 10 cities in a $60 million cash deal. The AM and FM stations in the deal are part of the TelevisaUnivision network. The media group purchasing the stations is newly formed, calling itself Latino Media Network.