Thanks to the VERY FINEST, BEST & BRIGHTEST TKC READERS . . . We turn our attention to a celebratory embrace enjoyed by Mayor Q upon the announcement of Kansas City's World Cup victory. 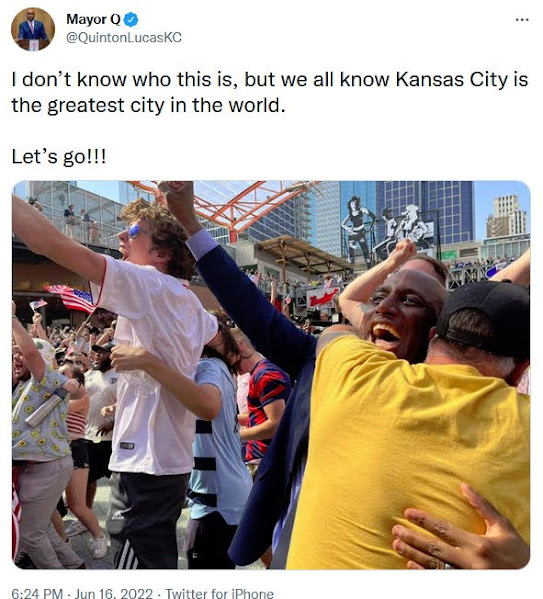 I think our blog community can do better than THAT . . .

KANSAS CITY, Mo. - On Sunday, representatives from Kansas City's World Cup bid will head to New York City to meet with FIFA officials. It comes after the city made history on Thursday by clinching a bid in the 2026 FIFA World Cup.

The FIFA World Cup is considered the Olympics of soccer. Kansas City will be the host for the first time ever in 2026.For 20 years or so, the soccer culture in Kansas City has been building towards this moment."Now that we got it, it's going to be a life-changing experience for me and all the Latino community that is here in Kansas City," said Raul Villegas, owner of El Padrino Soccer.Villegas is more than a fan."I've been watching World Cups since 1986.

KANSAS CITY, Mo. - After years of preparing its bid, Kansas City finally learned its 2026 FIFA World Cup fate on Thursday, securing a bid to host games in the world's largest and most celebrated sporting event. It kicked off a wild celebration at KC Live! in the Power & Light District.

It's huge news for soccer fans in Kansas City!Kansas City was announced as one of the North American host cities for the 2026 FIFA World Cup. Hundreds of fans filled KC Power and Light LIVE waiting for that announcement, and when it happened, the place erupted."It puts us on the world stage," said soccer coach Sarah Wallace.

KANSAS CITY, Mo - Regardless of whether or not someone is a sports fan, the 2026 FIFA World Cup coming to Kansas City will impact everyone in the city. It is a long-term investment in the city's future, reputation, people and undoubtedly, economy. According to U.S.


The World Cup is coming to Kansas City

FIFA officials announced on Thursday that Kansas City is among the cities selected to host soccer matches in the world's biggest singular-sports event: the 2026 World Cup tournament. Midwestern hunters often donate extra game meat, such as venison, to food banks. Even after being processed, this venison could still contain lead.