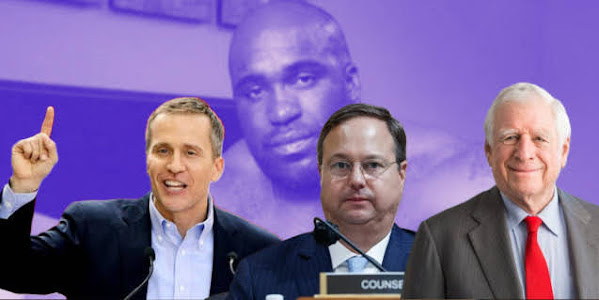 MAINSTREAM MISSOURI REPUBLICANS ARE NOW SO DESPERATE TO DESTROY THE POLITICAL CAREER OF ERIC GREITENS THAT THEY'RE WILLING TO GIVE THE SENATE SPOT TO THE DEMOCRATIC PARTY!!!

John Wood, former federal prosecutor and senior investigative counsel to the January 6 Committee, said the divisive politics shaping up in Missouri's U.S. Senate primaries prompted him to run as a mainstream independent candidate.

Former Missouri Danforth hatched a plan that will siphon votes from Grietens should he make it past the primary.

At a point when the Republicans were set to make overwhelming gains, infighting within the party has thwarted their progress.

John Wood officially running for U.S. Senate in Missouri as an independent

formerly the U.S. Attorney in Kansas City and more recently the senior investigative counsel for the House Select Committee on the January 6th Attack , is running for U.S. Senate in Missouri. Wood, who identifies as a mainstream Republican, will run as an independent.