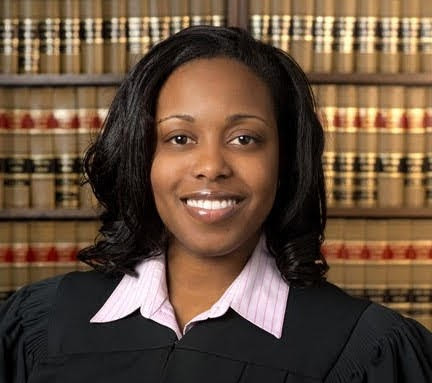 TKC has the utmost respect for the court and we advise our readers to tread lightly on this post and show at least a modicum of respect for the laws of our nation and the people who enforce them.

I'm leaving the comments open for now because I want to believe that smart people read this blog.

Legal debate on a political issue and a matter before the courts is appropriate.

Insiders question a recent ruling on the local control issue confronting the KCPD.

According to Casenet . . . The lawsuit against local control filed by Urban League leader Gwen Grant was assigned to Division 15 - Judge Jalilah Otto.

The decision to allow the case to proceed has raised eyebrows throughout Missouri given that the legal standard has been upheld for more than half a century. Moreover, lawsuits citing "taxation without representation" don't often get a lot of love at the municipal level.

We notice KC taxation arguments taking hold a great deal amongst KCMO politicos in the discussion of local control.

Fortunately, the line of reasoning only seems to be taking hold in the pages of the newspaper.

Thankfully, we talked to an insider and here's some welcomed insight . . .

"Trying to legislate through the courts is a non-starter given so much precedent over the question of local control.

STL fought most of these battles a decade ago and ultimately decided that putting the issue to a vote was the most equitable path forward. Ultimately, they won.

In Jackson County we're seeing judges unafraid to be be overturned and, subsequently, a surprising number of activist lawsuits. It's an expensive and strange path to take . . . Ultimately, it won't be successful."

KANSAS CITY, Mo. - Gwendolyn Grant, president of the Urban League of Greater Kansas City, says the current Board of Police Commissioners is "taxation without representation." "The only pathway for us to secure local control is either through legislative action of the Missouri Legislature or a statewide ballot initiative," Grant said.