Kansas City World Cup Questions Unanswered: Who Pays & What Do We Get?!? 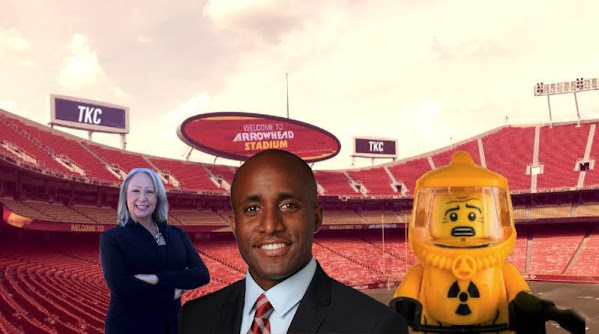 The big question amongst Kansas City "journalists" hopes to find a bit of World Cup accountability:

Who will pay for so many Kansas City World Cup improvements???

You're paying for the World Cup if you live in KC proper.

By way of sketchy money movements or even a tax . . . The cost will ultimately rest with taxpayers despite little benefit beyond social media hype.

Here's the newspaper FINALLY waking up to this fact . . .

But who will cover the entire cost to renovate the iconic stadium to meet FIFA specifications? And where will the money come from?

Nobody in the know seems to have the answer, which raises even more questions.

It is too early for financial projections associated with the World Cup, Chiefs officials have said.

But Kansas City Mayor Quinton Lucas’ guesstimate is on record: State and private funding will be needed to cover the $50 million price tag.

(Governor) Parson was asked about the funding source needed to reconfigure GEHA Field. At this point, nobody knows, he said.

Would the Jackson County Sports Complex Authority, the taxpayer-funded landlord of Arrowhead Stadium and neighboring Kauffman Stadium, pay for the improvements?

Arrowhead Stadium needs a lot of expensive work for the World Cup. Who'll pay for it?

OPINION AND COMMENTARY We know over the next four years, the Kansas City Chiefs will need to spend tens of millions of dollars to upgrade Arrowhead Stadium in preparation for the FIFA World Cup games in 2026. But who will cover the entire cost to renovate the iconic stadium to meet FIFA specifications?

We can't help but agree with a recent quote from Jackson County Legislator found by one of our BEST & BRIGHTEST readers . . . 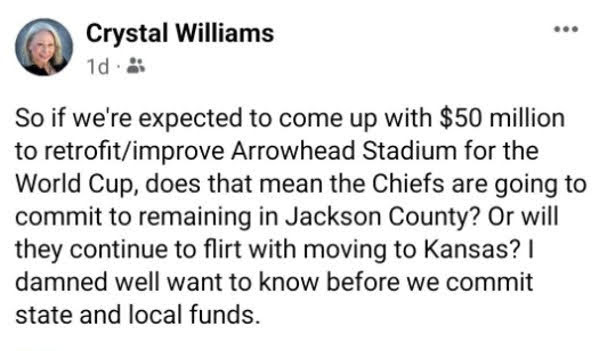