The leader of the Kansas City Star has fallen on hard times yet again.

A recent JoCo DUI bust hit the news today but, strangely, local media outlets are politely ignoring the drama. We don't blame them.

The Star really isn't the paper it was years ago and there's no reason to dwell on the misfortune of this far less important newspaper dude.

Credit where it's due . . . The almost daily newspaper reported on the in-house drama with a small snippet earlier today. . .

Mike Fannin, The Star’s president and editor, was arrested Tuesday night in Johnson County on suspicion of driving under the influence.

Now 55, Fannin was named editor of The Star in 2008, having previously served as managing editor and sports editor. He joined The Star in 1997.

Remember that our blog was FIRST to post Fannin's old school mugshot thanks to AWESOME TKC TIPSTERS and a really great newsie who now dominates the metro reporting scene at one of the local TV stations . . . 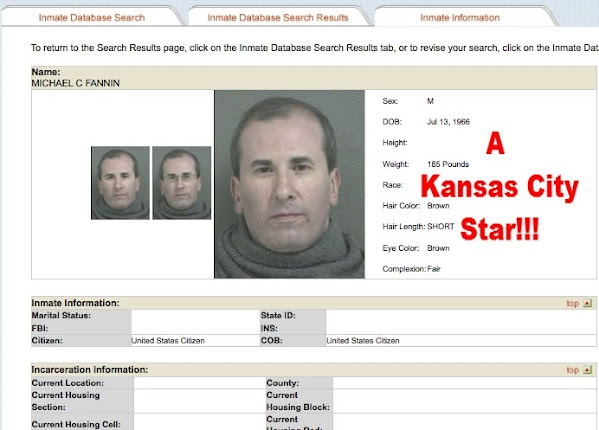 Still, since we blogged the first public DUI allegation against Fannin there has been SO MUCH that has changed . . .

The Kansas City Star has apologized for their racist past and now seems to be the print leader of progressive causes across the Midwest.

Maybe this charge will make their next round of contrition.

Again, our blog community was the first to put a DUI tidbit about years ago but this latest arrest info doesn't spark any of that same excitement because it matters to far fewer people.

This DUI non-issue for the Kansas City news publisher falls flat because JOURNALISM isn't really as important social media standing. THEREFORE . . . NOBODY cares what some dude in their 50s does with their life.

Bright side . . . Public ambivalence about the misdeeds of old school denizens of the discourse is comforting going forward for TKC given that we hope to get even more obnoxious once we hit the half century mark, hopefully, in the not too distant future.

I'm sure there's a political point to be made here but it won't really convince anybody and it's better to come from somebody with no sense of humor, a political ax to grind and no real life friends.

A while ago, TKC threw some of our bloggy scraps to a lesser publisher and that dude delighted in Fannin's old DUI . . . He made a big deal about Fannin's alleged failings nearly every week. AND THEN HE GOT BUSTED FOR HIS OWN FAR MORE EMBARRASSING DUI but rarely mentions it in his oddly moralizing occasional monthly posts on a blog that nobody reads.

And all of this doesn't mean that we're not curious to read your perspectives in the comments.

In the post-COVID era . . . It's bad form and off-putting to pounce on people's probs given that so many of us are confronting our own challenges.

Mike Fannin, The Star's president and editor, was arrested Tuesday night in Johnson County on suspicion of driving under the influence. Fannin declined to comment. Now 55, Fannin was named editor of The Star in 2008, having previously served as managing editor and sports editor. He joined The Star in 1997.